Hungarian born Schiff, regarded as being among the world’s great concert pianists opted to give his birthday performance in  London, his adopted home. 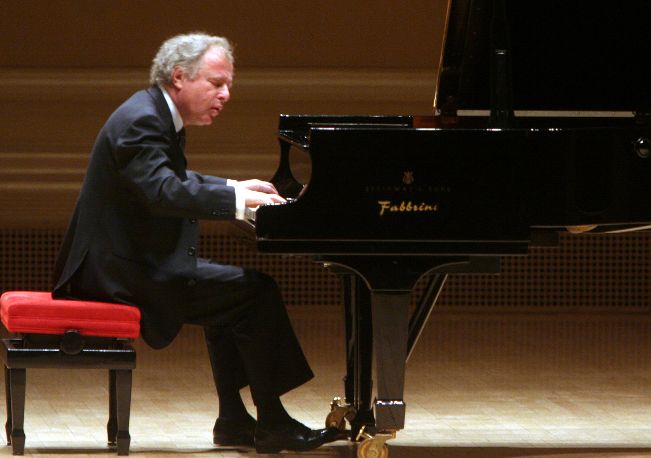 Celebrating your sixtieth birthday is a major event for most people, and none more so for concert pianist Andras Schiff , who last week displayed the full extent of his prodigious talents in front of an appreciative audience at the Wigmore Hall, in London.

Lovers of classical music were treated to a taste of Andras Schiff’s comprehensive repertoire, followed a first half performance of Bach’s Goldberg Variations with Beethoven’s Diabelli Variations to round off the second half of the concert.

The evening became even more complete for Schiff when he was presented with the Royal Philharmonic Society’s Gold Medal by the Duke of Kent. The medal which bears the effigy of Beethoven on its face was first awarded in 1870 , to mark the first centenary of the composer’s birth.

Schiff is recognized in the world of classical music, one of the most renowned interpreters not only off the music of Beethoven and Bach but also of, Mozart, Schubert and Schumann.

During his long running career Andreas Schiff has recorded complete piano sonatas of Mozart and Schubert and much of the keyboard music of Bach, as well as the complete range of Beethoven piano concertos. Schiff has also recorded the music of Sándor Veress a modern composer also of Hungarian origin who left his home country to live in Switzerland after World War Two.

Andras Schiff was born in Budapest into a Jewish family and began taking piano lessons at the age of five.
He later emigrated from Hungary in 1979 with the initial intention of settling in the United States. After discovering that he would be unable to meet the necessary requirements for US citizenship because of his touring schedule, Schiff initially accepted Austrian citizenship in 1987, establishing a permanent home in Salzburg as well as one in London.

In 2001 Schiff became a British citizen and now spreads his time between London, and his home in Florence, Italy.

Over the years, Schiff has made no secret of his criticism of the right wing leanings of the Hungarian Government. During the last three years since the Fidesz party came to power, Schiff’ admits that his unease with the way the political situation in Hungary is heading has grown.

The Fidesz party, lead by Viktor Orbán, represent Hungary’s national conservative faction. After the 2010 elections, the party joined forces with the Christian Democratic People’s Party to form a coalition holding two-thirds of the seats in the Hungarian Parliament.

According to political analysts, the supposedly center leaning government of Orban, has solidified its relationship with the Hungary’s third largest political party, the “Movement For a Better Hungary” recognized for their anti-Semitic rhetoric.

When questioned recently why he did not hold his Sixtieth birthday concert in Budapest. Andras Schiff surprised the interviewer by replying that it was unlikely that he would ever perform in front of a Hungarian audience again, or even set foot in his country of birth, after having received a number of anonymous death threats, as a result of expressing his anti-government views.