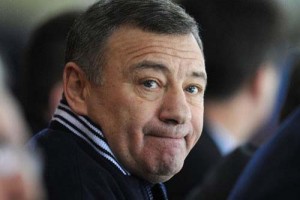 Billionaire Arkady Rotenberg could soon become an investor in Prosveshcheniye, Russia’s leading publisher of school textbooks, according to an industry insider, the Moscow Times reported yesterday.

After swallowing up 90 percent of Scanex in mid-October, a supplier of satellite maps for Yandex, for $30 million, he now has his eyes on the publishing business.
If the report is confirmed Rosenberg, a former judo trainer and old friend of President Vladimir Putin, will be buying into the business just as a revised new set of standardized history textbooks, which exclude figures such as former Yukos owner Mikhail Khodorkovsky and powerful late oligarch Boris Berezovsky, land on the President’s desk for his approval.

Prosveshcheniye translates into English as “Enlightenment”, itself purchased the Olma Media publishing group in 2012 and was valued then at about US$125 million. As much as 50% of Prosveshcheniye’s revenues come from state contracts, according to the Moscow Times.

Such an appointment as chairman may well be only a preliminary step to a deal being signed between organizations owned by Rotenburg and the publisher’s shareholders.

A spokesman for Rotenberg declined to comment on the reports.

In 2008, Olma Media Group, before it was bought by Prosveshcheniye actually published a book called “Learning Judo with Vladimir Putin, ” the royalties from which went to the President an avid practitioner.

Arkady Rotenberg and his brother Boris Rotenberg own stakes in a number of companies, including 37.27 percent each in SMP- Bank, one of Russia’s top 50 lending institutions, and 80 percent jointly in Invest Capital Bank in the republic of Bashkortostan. Vehicles controlled by Arkady Rotenberg also own nearly 80% percent of fertilizer producer Minudopreniya in the Voronezh region

In late September, Rotenberg also took a look at buying a piece of the state-owned Sheremetyevo Airport, where TPS Avia Holding, which he co-owns, has controlled freight operations there since June.