Halbertal, a professor at both New York University and the Hebrew University of Jerusalem addressed a packed house this week as part of the Renee and Lester Crown Speaker Series, sponsored by the Crown Family Center for Jewish and Israel Studies. 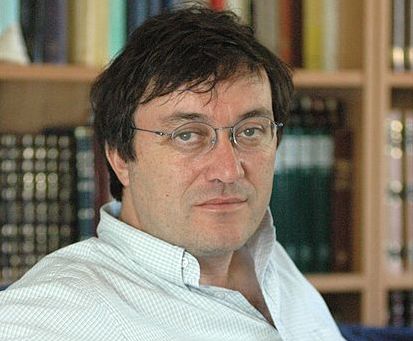 Professor Moshe Halbertal was the guest speaker at an event held this week in the Crowe Hall of the Northwestern University campus in Evanston , Illinois, with a packed house made of both students as well as local residents, enjoying Professor Halbertal’s insights on life in the Middle East, in a lecture entitled “the identity of Israel as a Jewish democratic state.”

Professor Halbertal kicked off his lecture by explaining the two definitions of the Jewish democratic state, first by religion and then by nationality, going on to elaborate the five main factors that will likely contribute to the future of a Jewish democratic state, taking the position of the Orthodox community in Israel, the growth of a vibrant secular community, the implications on the country or the massive way of immigration from the former Soviet Union, the standing of the Arab community in Israel within the society, and the challenges that the country is liable to face in the future, both long and short term.

Winding up his speech, Professor Halbertal touched briefly on the subject of conditions of democracy, pointing out that in modern Israel there exist two conditions that allows a genuine democracy to continue and thrive. First that the state must respect and give equal rights to all of its minorities, whilst recognizing the rights that all minority groups deserve.

Professor Barry Wimpfheimer, director of the Crown Family Center for Jewish Studies took the role of introducing the guest speaker to the audience, explaining that Professor Halbertal is an extremely well-known intellectual in the world of Jewish studies world, with a unique approach to academic inquiry.

Professor Halbertal is the author of seven books, as well as the co-author of another, and spoke Wednesday.

Professor Moshe Halbertal has also been the recipient of a number of awards for his book writing, including the Rothschild Foundation’s Bruno Award for 1997 and the Goren Goldstein Award for the “Best Book in Jewish Thought” in 2000.

In addition, Professor Halbertal is a member of the Editorial Board of the Jewish Review of Books.

Moshe Halbertal is the author and co-author of a number of important books on Judaism, including People of the Book: Canon, Meaning and Authority” and “Idolatry” (which he co- authored with Avishai Margalit) both of them published by Harvard University Press. In addition, he also authored “Concealment and Revelation: Esotericism in Jewish Tradition and Its Philosophical Implications” that was published by Princeton University Press. Author novels produced by Halbertal include “Interpretative Revolutions in the Making”, and “Between Torah and Wisdom.”

Lester and Renee Crown  have an involvement with the Northwestern University going back close to seventy years, which began when Lester Crown studied there for his bachelor’s degree in chemistry, before entering into a career that saw him become one of the most successful industrialists in the United States in the post Second World War years.

The Crowns have been longtime members of Northwestern’s Board of Trustees, with their presence as well as their involvement in the intellectual life and leadership of the University has been recognized as being integral to the University’s achievements as well as its future plans, according to a recent statement issued by Northwestern President Morton Schapiro

“Lester’s generosity is guided by his long-held belief that students need to learn the history and reasons for the complex relationships in the Middle East, as well as an understanding of Israel’s key position in the region.” Schapiro summed up “

Renée and Lester Crown’s past support of Northwestern includes significant gifts to support engineering and the physical sciences, to build the Henry Crown Sports Pavilion and the Crown Family Center for Jewish Studies, to help the University expand Middle East studies.

Announcing his funding of the Renee and Lester Crown Speaker Series, Lester Crown recalled spending a great deal of time in discourse about the Middle East in general and about Israel in particular. “Renée and I are very pleased to help give future leaders at Northwestern a deeper understanding of the complex issues related to Israel and its crucial role in the world.” He summed up.

Apart from his philanthropic deeds in the United States, Lester Crown is also a member of the American Committee for the Weizmann Institute of Science as well as Tel Aviv University’s Board of Governors.