Steyer is financing a four-part, $1 million advertisement campaign coming out against the US Government’s proposal to grant a cross-border permit for the TransCanada Corporation pipeline. 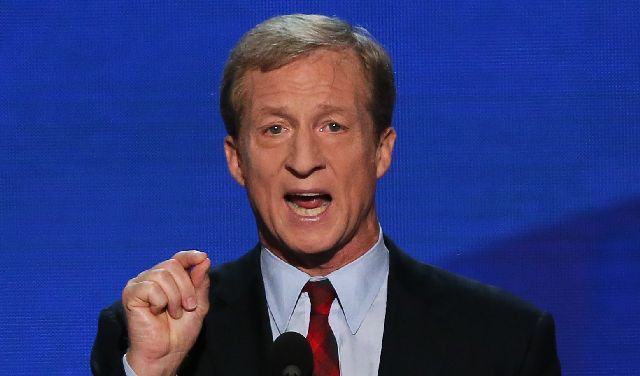 Tom Steyer is a man who has devoted his considerable talents and energies to protecting the environment. A successful asset manager and entrepreneur, founder and Co-Managing Partner of the San Francisco-based hedge fund Farallon Capital Management and partner in the private equity firm Hellman &Friedman, has put his professional life on hold to focus his activities on saving the environment and reducing the effects of climate change.

Steyer has placed some of his considerable financial muscle behind an advertising campaign against granting permission to build the pipeline planned transport oil from Canadian massive oil sands projects to refineries along the Gulf Coast.

Steyers commercials are believed to be a reaction to campaign finance by the American Petroleum Institute, whose energy-industry members in favor of the pipeline, and who financed a TV and online advertising campaign, portraying the Keystone line as being a major spur to job growth in the U.S.

The Keystone pipeline is slated to transport around 830, 000 barrels a day from the oil sands of Alberta, with the controversial pipeline running across six states before it reaches the refineries running along the coast of the Gulf of Mexico.

The proposal to build the pipeline on behalf of the TransCanada Corporation is currently under consideration by the U.S. State Department, with the ultimate decision lying in the hands of President Barack Obama. Environmental groups have been particularly active in are urging Obama to vector the proposal to build the pipeline, arguing that, apart from the obvious environmental issues, its presence would be liable to encourage considerably more production and consequently damage the environment and exacerbate the effects of climate change.

Obama has recently issued some hints that he would not be in favor of granting approval to the Keystone project if you felt that its presence on American soil would be very detrimental to the environment, going on to make some cryptic comments regarding claims from pro-Keystone lobbyists that pipeline’s existence would lead to tens of thousands of new American jobs.

Steyer, an active Obama backer has already stated that his backing of the advertising campaign was principally aimed towards providing the President with some arguments in favor of rejecting the pipeline.

The message contained in the first advertisement due to hit the American TV screens today is that constructing the pipeline will neither help to reduce U.S. dependence on foreign oil or even spur the American economy. The reason for this argument is that, the oil sands will be sent directly to refineries along the Gulf Coast and from there shipped out to the Far East and particularly China. According to initial viewing reports, the first advert includes extracts from a testimony given by a TransCanada executive during which declined to make any form of commitment that the oil shipped through the Keystone pipeline would be for U.S. domestic consumption.

Executives from TransCanada have come up with some fairly strong arguments against Tom Steyer’s claims stating that simply doesn’t make sense to purchase cheaper Canadian crude that needs to be shipped a longer distance from the Gulf while they continue to import oil from the Middle East and Central America
Meanwhile the US State Department released a draft analysis of the pipeline in March of this year. The analysis noted that U.S. exports of refined products are increasing as refiners “respond to lower domestic gasoline demand and continued higher demand and prices in overseas markets”, whilst pointing out that almost half the products refined in the Gulf Coast serve the domestic market.

Since 1986, Steyer has been a partner and member of the Executive Committee at Hellman & Friedman, while at the same time founding and managing Farallon Capital Management, LLC, building it to a company with a worldwide presence. Farallon is described as being one of the first multi-strategy funds , handling a broad spectrum of domestic and international investments, on behalf of Farallon’s institutional investors , mainly made up from college endowments and non- profit foundations.

Thomas Steyer is also co-founder, with his wife Kit, of the OneCalifornia Bank, an Oakland-based community development bank. The bank was established with the purpose to provide loan facilities as well as other banking services to small businesses, local communities, and individuals in California.
Steyer announced in October 2012 that he would be stepping down from his position at Farallon in order to focus on political activism, in particular on advocating for alternative energy. He cited his desire to focus on giving back “full time” and to revolve his life around service.

In the same year, Tom Steyer, his wife Kit, along with Warren Buffett and Bill Gates, were the first to sign a Giving Pledge in which they undertook to donate half their fortune to charity. Steyer also says on the board of Next Generation, a non-profit organization focused on tackling issues relating to the environment.