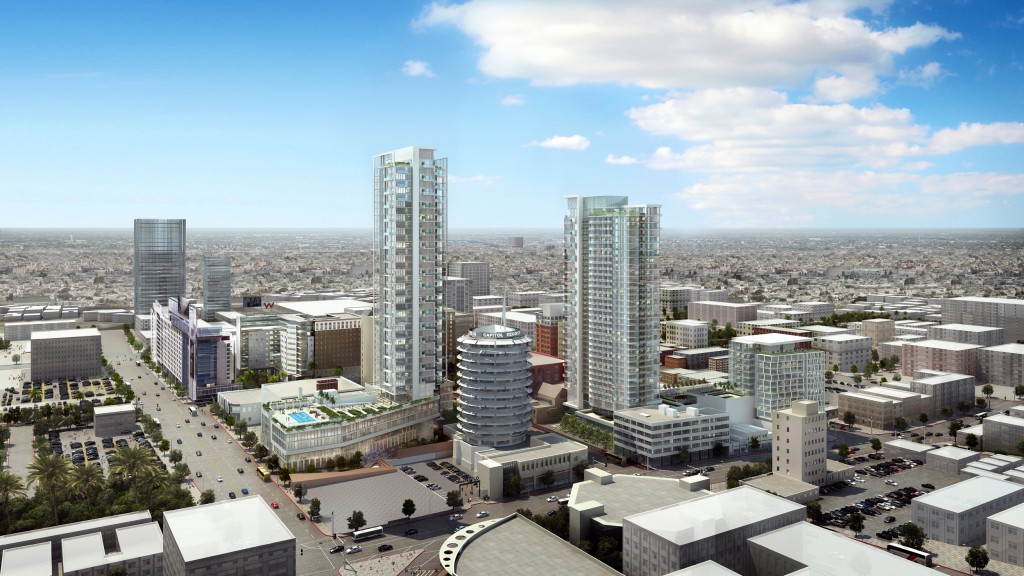 As long range investors specializing in large mixed use projects, Millennium are accustomed to the myriad planning, legal and other hurdles that can get in the way of, and sometimes delay or even lead to the cancellation of, a major new building project, and perhaps sometimes are not always quite as open about them as they might be.

Accordingly we learned today that one of their major planned new projects, this time in the famous neighbourhood of Hollywood itself has been put on hold, pending examination of its proximity to one of the many earth quake fault lines that are dotted in and around Los Angeles. The last major earthquake to hit Los Angeles was in 1905, which caused massive amounts of destruction and general mayhem, and the city has in a way been living in expectation of another one ever since.

When you go to Los Angeles most areas of the city are still relatively low-rise construction, partly because the luxury of a very wide coastal plain allowed the city’s founders had to build the city that way in the first place, but also presumably recognizing some of the dangers inherent to high rise buildings in an earth quake fault zone. This is so no matter what expensive construction techniques you might use to minimize the problem, including massive building-shock-absorbers into the foundations of many of them, (as they routinely do in downtown L.A. itself which has many tall towers). Even so building right on top of a fault line is considered a risk too far as no amount of shock absorbers will then stop a building from falling if an earthquake makes a direct strike underneath it.

A proposed new twin-tower project, Millennium Hollywood was abruptly put on hold recently when California’s State Geologist said that a nearby earthquake fault line is active and might be running directly under the site. The City of Los Angeles had actually already earlier approved the project the previous week, which flanks the older, iconic, circular Capitol Records building, close to Hollywood Boulevard itself. California State law however forbids construction of such high rise buildings directly over an active fault line.

The 1 million square foot project is therefore now on hold while developers and the authorities try and figure out what to do next. The blame game is also in full swing between supporters and opponents of the project. Those in opposition are of course saying it is a coverup, alleging that “smoking-gun” emails show the developer and people at City Hall knew all about the fault danger, but chose to keep it quiet.

The trouble is well-defined maps that clearly delineate where such fault lines pass are apparently hard to come by. You can see clearly the historical horizontal scale of the expansion of the city in the rendering above, that also shows the new proposed towers. At 35 and 39 stories the new towers are clearly going to visually dominate the surrounding areas in any case.

Local newspaper LA Weekly reported on July 24th that an email cited by Robert Silverstein, a lawyer representing about 40 groups opposing the project, was reportedly sent to Building and Safety General Manager Raymond Chan and Millennium attorneys by city “case manager” Charmie Huynh. It reportedly said: “City Geologist Dana Prevost met with the project team to discuss the Hollywood Fault line that could potentially be crossing the property.”

The clearly alert, and on the ball, attorney Silverstein also produced a map prepared by Langan Engineering & Environmental Services, a private firm hired by developer Millennium Partners, in November of 2011 that puts the project on the fault line. The map was apparently not subsequently included in the project’s required Environmental Impact Report. A nearly identical map, dated May 2012, also shows the project slightly to the north of the fault line, which would technically be out of harm’s way.

It is important for the city and for the State to now get this right, as there are several other high rise towers planned for the future as well. Once high rise building becomes a habit, even in an area as spread out as Los Angeles, and accepted by consumers as a fashionable way to live and work even in suburbia, then land use imperatives will tend to encourage it as it means more profits for developers.

John Parrish, the head of the California Geological Survey, told the Los Angeles Times that earthquake maps are too general to rely on when determining if a site is safe and that the only way to be sure is to dig trenches to locate the paths of specific fault lines. Maybe that will happen here.