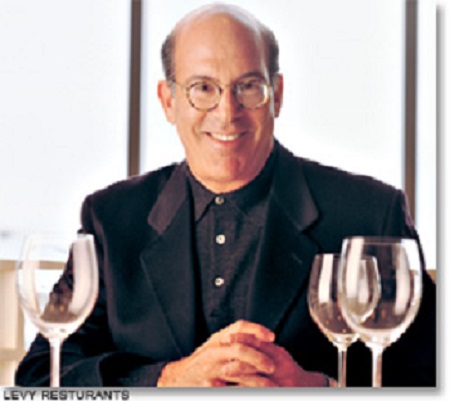 Chicago based Levy Restaurants has succeeded in establishing a bond between people who go to the Super Bowl and our liking for a delicious home cooked meal.

35 years ago, Brothers Larry and Mark Levy opened a deli called D.B. Kaplan’s Delicatessen in Chicago’s Water tower Place, with the help of their mother Eadie.

The Levy Restaurants brand has since become a national chain of award-winning restaurants, today employing thousands of workers in over 100 US locations and several more abroad.

Major success for Levy’s came when they combined a fine-dining experience with America’s love of sports.

The idea emerged in 1982, when they opened a restaurant at the old Comiskey Park, home of the Chicago Sox. 3 years later, Levy began supplying dinning services at Chicago Cubs’ Wrigley Field.  The company has since expanded coast to coast, opening branches in well known locations like Wolfgang Puck Grand Café at Walt Disney World Resort, Staples Center in Los Angeles, and the American Airlines Arena in Miami.

Just a few days ago, the Portland Trail Blazers announced that Levy Restaurants had been selected as the official food and beverage provider at their Rose Garden Arena.

And today the sbe entertainment group, an industry-leading hospitality, lifestyle and real estate development company, and Larry Levy, Founder and Chairman of Levy Restaurants, and Bob Heyat today announced their partnership to launch The Redbury Hotel South Beach, slated to open in the Fall of 2013.  The partnership heralds the first hotel collaboration between leading hospitality industry innovators, Sam Nazarian, Founder, Chairman and CEO of sbe, and restaurateurs/developers Larry Levy and Bob Heyat.

Levy’s cuisine has even been granted a series of distinguished awards, such as Restaurants and Institutions Magazine’s Ivy Award three times, the James Beard  Foundation Award and a Gold Medal from the American Culinary Federation.

We asked founder Larry Levy, and President & CEO Andy Lansing, of Levy Restaurants by email how they managed to tap into sporting culture in the first place.  Andy Lansing responded to us as follows:

“It was 1982, and the White Sox had built skyboxes at old Comisky Park in Chicago. They thought that they could sell the skyboxes more easily if a restaurant company would “cater” the food. They approached us and we said no five times. We said, “We’re not caterers, we are restaurateurs.” Finally, we said yes for all the wrong reasons. We love baseball and we thought we’d get good seats to the games if they were ever in the World Series.

Ultimately, our restaurateur approach completely reinvented the experience and tempted fans with something totally unexpected at that time – delicious food at the ballpark. Right away it became clear that there was a whole new appetite – literally – for a great dining experience in sports and entertainment. Building on that success, we brought restaurant quality dining to sports and revolutionized the fan experience, expanding the possibilities of what teams were able to achieve for their fans.”

How did you get the idea to break the old connection between sports events and junk food and bring premium healthier dining to popular sports?

“Let’s not kid ourselves; there still is junk food if you want it! We do, however, have more options than ever before for fans to make healthier choices.

What continues to set us apart is our restaurateur-driven approach. Our menus evolve with inspiration from the community and we stay tuned in to new trends in dining, like vegan, vegetarian or gluten-free menus. So while we celebrate game day traditions, we bring out the very best flavor, like doing a perfectly grilled hot dog on freshly toasted bun. And when we create menus we also tap into what gives a particular city or region it’s unmistakable local flavour, and then do our best to provide that to the fans and guests.”

The Super Bowl, the Kentucky Derby, the U.S. Open Tennis Championship … you have been catering all these giant national sport events.  Tell us how you can deliver premium dining for events of this magnitude?

“Massive events like the US Open, the Kentucky Derby and the Super Bowl require extensive planning in every aspect to bring our partner’s vision to life. We methodically go through every detail, including things like developing menus, staffing and training, concept design and promotional planning. There are a myriad of variables leading up to and during major events. It is essential to have the best team in place, not only to plan, but to adapt and react spontaneously with the smartest solutions and oversee the thousand details to ensure everything, from printing of the menu, the layout of the space, to the entrée served, is flawless.”

The social media revolution has a crucial impact on the way business is done these days. Can you describe this effect on the restaurant industry?

“There is no doubt that the digital age has had an enormous impact on every aspect of life and how we communicate. Social media has opened up incredible opportunities for us to have a real-time dialogue with guests and fans. Today, we can reach guests in a whole new way and engage them while they are standing in line checking out their Facebook pages on their smart phones, or at home on their iPads planning a trip to the stadium. We also get immediate fan feedback through sites like Yelp, Twitter, etc. about what they liked and what wasn’t so great.”

In the past you’ve said that you hire people for two main reasons: being nice and being passionate. How do you balance these qualities?

“What I always tell people is that being nice, and being passionate and being focused on excellence are not mutually exclusive. I think a big part of our continued success and growth as a company is due to our collective passion for sharing heartfelt hospitality with our guests”.