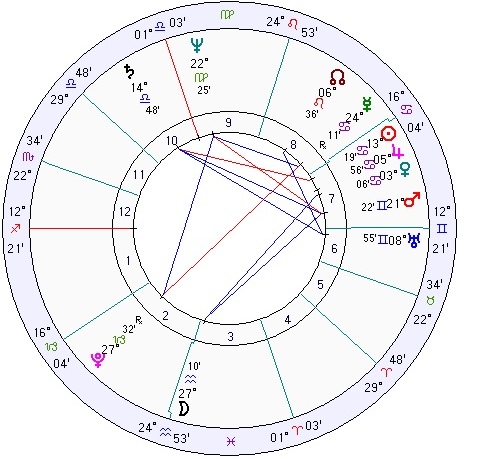 For the U.S., June will be one of the toughest months of the year and, therefore, its economic impact will be more dramatic in every way. The stars creating the crisis will be in Cancer and thus will affect the U.S. economy more so, for it was born under the sign of Cancer.

Dangers of warfare and military activity will intensify this month and may also continue into July 2013. This summer is going to be very hot and with a lot less control than we desire or usually have.

The U.S. chart this month indicates that it will be rattled. Between the Eighth and the 13th of June aspects of the planets Venus and Mercury, both joining the sun in Cancer, in the U.S. chart will form a Grand Square aspect.

This aspect, which is indicative of difficulties, war and economic challenges might, in the main, be indicative of a problematic labor market but might also carry over the negative effects reverberating from Europe where the situation is getting more difficult. Mars clings to Uranus in Gemini and dramatic events are in the offing, bringing financial meandering which might include corporate bankruptcies. More violent days are ahead starting with the possibility of a plane crash. In addition, nature’s violence is also anticipated and it may harbor tornadoes and hurricanes that will cause significant damage.

Though Mars in Gemini reflects, in the U.S. chart for June, acute difficulties and a struggle to improve the employment situation and investments in mass media, these areas, nevertheless, will show improvement in June.

Obama’s astrological situation will not be easy at the very least until mid-June, which can add to his budgetary struggles with Congress. A positive turn of events will take place on June 18 in the area of Obama’s endeavors and his clout will be on the ascent due to a financially important achievement. There is no doubt that in due course he will bring the U.S. better economic times but many hardships and struggles will be experienced till then and in August he will be embroiled in a major foreign relations crisis.

Meanwhile, distinct difficulties will occur in the area of real estate between the 16th and 22nd of June 2013.

Cancer’s three weeks retrograde motion in Mercury, will occur between the 26th of June and the 20th of July, however, its effect will be felt starting on the 21st of June and will be felt distinctly in the money markets of the U.S. It will also embroil the attempts to produce rapid economic change in unexpected difficulties. In addition to all these economic travails, natural disasters may augment the financial losses and add loss of life by the end of June 2013.

Severe natural disasters may affect the U.S. during June-July. 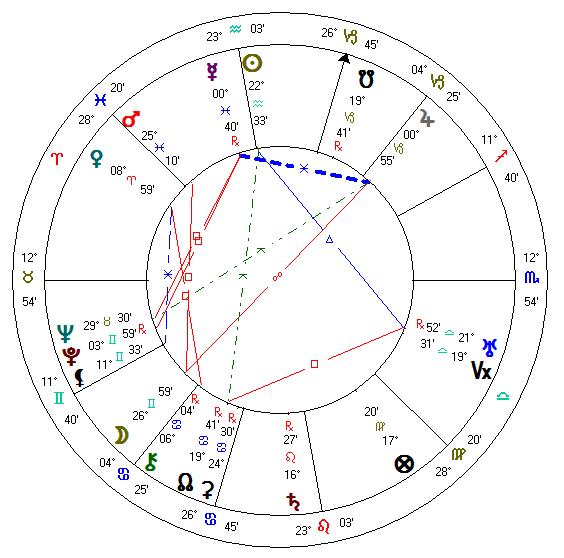 Astrologically, modern Japan was born in Tokyo at 10:30, a.m., on the 11th of February 1889. Its sun is in Aquarius with a Taurus rising sun, a combination of two opposite signs where the rising sun in Taurus indicates great esteem for money and material things whereas the effect of Aquarius is that of success through technologies such as electronics, robotics, automobile industry and the more sophisticated areas of chemicals development and manufacturing.

Japan, according to its chart, has not yet reached the nadir of its expected difficulties. Starting on the 25th of June it will be in a major crisis, as Jupiter enters Cancer and will be situated opposite the “natural Jupiter” in Japan’s chart (which is in Capricorn in the 8th house, controlling Japan’s economy).

For Japan, this year the sun will be in progression in Japan’s fiscal house where it creates an aspect of 90 degrees, i.e., a square, to Mars in Pisces which indicates a financial crisis relating to inflation, unemployment, a decline in profits and rapid growth of a monetary deficit.

But that’s nothing in comparison to the great cycle of Japan that will augur for three years and at the end of which a massive economic plunge is expected, reaching its deepest point when the sun progression will have the Moon in Gemini in Japan’s chart, thus producing an eclipse in the house governing finances. As a matter of fact the method, the approach and the manner in which Japan’s economy has been managed so far will have to undergo a radical adjustment, from top to bottom. Saturn is present in the Sixth House of Japan’s chart, which is the house that governs labor and health. A major increase i

​n​ illness may be had in the country and it may be the consequences of radiation or water and soil pollution on a very large scale.
The matter of privatization in Japan will fail eventually. The Japanese public, which is located at the Fourth House of the Japanese chart under the sign of Leo with Saturn in there as well, is very proud, and it will increasingly rebel as Saturn reaches the 17th degree of Scorpio by the end of 2013 and then remaining there during 2014. The labor market is being used and as financial difficulties grow so will the rate of unemployment. There is a chance that the government will be brought down or resign on its own accord.

This year Pluto creates a 90 degrees aspect to Venus in Aries (ascendant’s control) which on at least three occasions will bolster the crises during this month. The first time, between the Sixth and the 13th of June, the second time between the Tenth and the 16th of June, and again along with Mercury’s retrograde motion in Cancer between the 26th of June and the First of July.

The structure of Japan’s chart, with the sun ruling Aquarius facing Saturn in Leo, prevents washing of laundry in public. Thus, unnecessary information is made public neither by the authorities nor by the people – individuals find it difficult to share hardships whether on the micro or macro levels. But this time, society is in a crisis in every way and even if it will still have good days here and there, on a large scale Japan as a society is due for some serious soul searching.