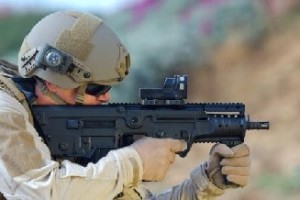 Israel Weapon Industries (IWI) has announced the introduction of a new conversion kit for their X95 assault rifle that permits use of 5.45mm caliber  – making it the only weapon in the world that can shoot with as many as 3 calibers: 5.56mm, 9mm, and now 5.45mm.

IWI is an Israeli manufacturer of small arms, that was spun out of  the State owned Israel Military Industries as a separate company and is now part of the SK Group which is controlled by Israeli entrepreneur Samy Katsav and includes a number of defense-related companies.
With its new flexibility the X95 can be used with ammunition from both Western and Eastern sources which can make it, overall, more economic to use and easier for users to train with and supply.
Since becoming an independent company IWI has become a leader in the production of combat-proven small arms for Governmental and Military entities as well as law enforcement agencies around the world.
The new conversion kit was developed for the very successful X95 – which can be used as either an assault rifle, as a regular carbine, or as a submachine gun – with an effective range of 150m in its 9mm caliber configuration.
The new capabilities will be exhibited at a number of defense industry and home security industry shows coming up during 2013.
The new conversion kit has already been armament and operationally tested in extreme conditions including dust, water, heat, and cold- to minus 60 degrees celsius– as well as for shooting accuracy, passing all tests successfully. Designed for Military, Law Enforcement, and Special Forces use the X95 was developed in close cooperation with elite units, and has been tailored to their specific requirements.
The gun incorporates advanced technology enabling conversion between calibers within minutes permitting, for example, Special Forces to use the same weapon platform for a several different purposes.

According to Uri Amit, IWI’s CEO, “We developed the kit in response to requests we received from our customers for a 5.45mm ammunition weapon so that they could use the ammunition in their inventories. This enables considerable savings by allowing our customers to change the rifle barrel according to the ammunition on hand, as well as matching the weapon to the evolving operational scenarios. IWI works closely with its worldwide customer base, providing solutions that are designed to meet their specific needs.” He continues, “The X95 is one of the most popular weapons of its category in the world – a success based on its exceptional effectiveness and reliability. We continue to develop a range of new configurations and applications in order to ensure its effectiveness in the widest possible range of situations and field requirements.”