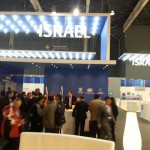 It’s now old news that over 50% of internet traffic is coming from mobile devices, and with the growth of mobile the congress has grown equally fast.  This year MWC was by far the largest ever taking place in a new conference center in Barcelona 20% larger than last year event. Over 70, 000 people were in attendance with 30 countries having setup their own pavilion.

One of the most exciting and largest pavilions was Israel with many of the legendary companies that have made Israel famous for its world class technology as well as many newcomers.

The veteran Israeli companies included Telit, Radware, Audiocodes, Telmap, Amdocs and Jungo. All of whom have been exhibiting for years and have either gone public or sold for millions inspiring many of the new starts ups gaining traction and worldwide press.

Viber may have received the most attention considering it has announced that it reached 175 million users, which is over 3% of the population in the world! It’s just to show you how fast technology can travel when in 3 years a new product can reach such an enormous scale. Success of this level also leads to enemies, with Viber having been blocked in Iran and Lebanon, and users of Vodafone throughout Europe constantly complaining that the service is disrupted.

Sync.me was in attendance announcing their recently released Android app, which allows you to pull in all your Facebook contacts details into your contacts with a single sync. What’s unique about this you ask? Their CEO Shlomo U. explains that their app allows you to have some really cool features like seeing the latest status update on the lock screen when your friends call you. Maybe that’s why they already have over 5 million users on the iPhone alone in less than 1 year.

Appsflyer is another innovation coming out of Israel, focusing on using data to help companies convert their traffic. Having integrated over 20 companies including one of the largest mobile innovators Foursquare, they have proven that data is what a company needs to prove what the customer wants, and with so much data available today they offer the aggregation possible to achieve that.

And to wrap it up and show that innovation can come from anywhere, the walking stick by Fujitsu must be mentioned. The Japanese have always strongly held onto heritage once again proven by their 3G, Wi-Fi equipped walking stick which lets the walker know where to walk by vibrating and best of all a full computer inside can communicate with a hospital providing the exact location of the walker in case of emergency.