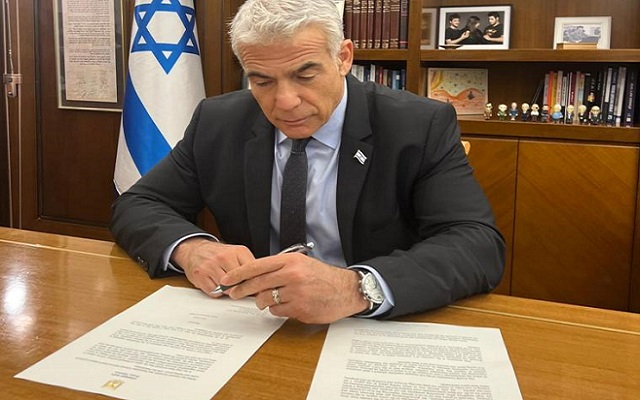 Prime Minister of Israel Yair Lapid sent a letter to over 50 world leaders calling on them to exert their influence on the Palestinian Authority (PA) in order to prevent the General Assembly vote on an advisory opinion from the International Court of Justice (ICJ) on the Israeli-Palestinian conflict.

At this time, Yair Lapid is only the acting/caretaker prime minister as Benjamin Netanyahu’s opposition won the recent Knesset elections and he is expected to return to the premiership when he soon forms a new government. That being said, Mr. Lapid’s position on this matter, as well as the tone of his letter, seems to be no different than what Mr. Netanyahu’s position would be.

On the issue of international meddling in the overall Israel-Arab conflict, Israelis tend to be in agreement that their country should be left alone to reach any final agreement with the Palestinians. And should any agreement be perceived as having been forced on the country by either the US or the world powers, Israelis would surely resent and reject it as not being valid.

A few weeks ago, a UN committee voted to do just that, at the behest of the PA. But Israel, and countries like the US, condemned the move saying that it would not help to advance the peace process. Instead, it would do the opposite by complicating matters.

In the letter, Yair Lapid emphasized that if the initiative to prevent a vote does not succeed, he expects Israel’s friends to stand alongside it and vote against the resolution.

This resolution is the outcome of a concerted effort to single out Israel,” said Lapid, “to discredit our legitimate security concerns, and to delegitimize our very existence.”

Prime Minister Lapid added that the status of disputed territory should be subject to direct negotiations between Israel and the Palestinian Authority, and that bringing the matter before the ICJ contravenes the principle of direct negotiations accepted by the international community and will play into the hands of the extremists.

The letter was sent to the leaders of nations like the United Kingdom, France, Croatia, Romania, Bulgaria, The Netherlands, Slovakia, Latvia, Georgia, Brazil, Uruguay, Peru and Vietnam.

In the letter, Lapid explained that in the past few years have been years there has been what he called “great progress in the Middle East,” from the Abraham Accords “which changed the landscape of the entire region, to the historic Negev Summit, and more recently, the groundbreaking gas deal between Israel and Lebanon.”

Lapid explained that this path of peace is already improving the lives of Israelis and their Arab neighbors alike, “promoting prosperity for our peoples and building a better future for us all. All these achievements were reached through negotiations between the relevant parties — the only proven way to attain lasting peace in our region.”

The Fourth Committee of the UN General Assembly adopted a draft resolution in which the International Court of Justice (ICJ) is asked to render an advisory opinion concerning the Israeli-Palestinian conflict. Almost half of the UN’s member states refused to support this draft resolution, sending a clear message of disapproval. However, explained Lapid, numerous attempts by several states to dissuade the Palestinian Authority from going down what he described as a “harmful path” have been rejected.

Lapid added that this resolution is the outcome of a concerted effort to single out Israel, to “discredit our legitimate security concerns, and to delegitimize our very existence.”

He accused the United Nations Human Rights Council in Geneva and its Commission of Inquiry (COI) against Israel of engaging in a biased campaign against Israel saying that on numerous occasions, the members of these bodies have “made clear their deeply-held bias, bigotry and racism against Israel and the Jewish people. The continued employment of these members isn’t only moral hypocrisy, it is in direct contravention to the core principles of the United Nations.”

Prime Minister Yair Lapid went on, in his letter to the world leaders, to explain that it has long been accepted that the status of disputed territories (areas claimed by both the PA and Israel) will be subject to direct negotiations between Israel and the Palestinians.

“A one-sided change to such a policy,” he said, “will have detrimental effects on the entire region.”

Bringing the matter before the ICJ, claimed Lapid, “expressly contravenes the principle of direct negotiations accepted by Israel, the Palestinians and the international community, and will only play into the hands of extremists, further polarize the parties, and undermine the positive work that has been done over the past few years.”

It is too soon to state what the likely outcome of a full vote by the UN on the matter will be. But even if this matter is referred to the ICJ, it is far from a certainty that the body will act on it and even if it rules someday, no one knows exactly what practical affect any such a ruling will have.