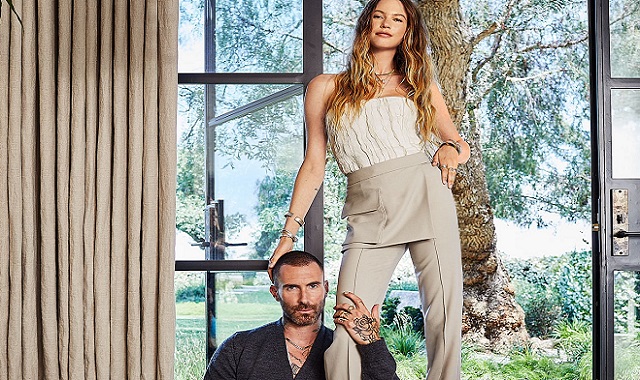 Adam Levine, the singer for “Maroon 5,” and his wife, Victoria’s Secret supermodel Behati Prinsloo, are reportedly expecting their third child. The couple, who have been married since 2014, already has 2 children, 2 daughters, Dusty Rose, age 5 and Gio Grace, age 4. Adam Levine is 43 and Prinsloo is 34.

Born Adam Noah Levine in Los Angeles, California to a Jewish father Fredric Levine, the founder of the retail chain M. Fredric, Levine’s parents divorced when he was just seven years old. Levine considers himself Jewish, but did not have a Bar Mitzvah because, as he once explained in an interview, he felt the presents involved were inappropriate. “I felt as though a lot of kids were trying to cash in,” he said. “I just don’t think it’s the most respectful way to deal with God and beliefs and years and years and years of cultural heritage.”

Last November, Behati Prinsloo told “Entertainment Tonight” that she and Adam Levine, “always knew we wanted a second one. So I think for me in those two years, when I had two babies under the age of 2, I was just like, ‘Don’t even think about it!’ But I do also want five kids, but don’t even think about it,” she explained to the outlet.

“You know what, never say never. We want a big family, who knows?” Prinsloo added. “We’re leaving it up to fate and just what happens. What will happen, will happen. So there’s no limits to it.”

As for Adam Levine’s feelings on the subject of having a big family, he once quipped on the Ellen DeGeneres show, “I want to have 100 kids. I want to have more kids than would be socially responsible.”

In 2019, Prinsloo said of motherhood, “Here’s to the sleepless nights, bleeding nipples, crying, laughing, the highest of highs and lowest of lows and everything in between. I won’t change a single thing, being mom to Dusty and Gio keeps me strong, motivated and empowered.”