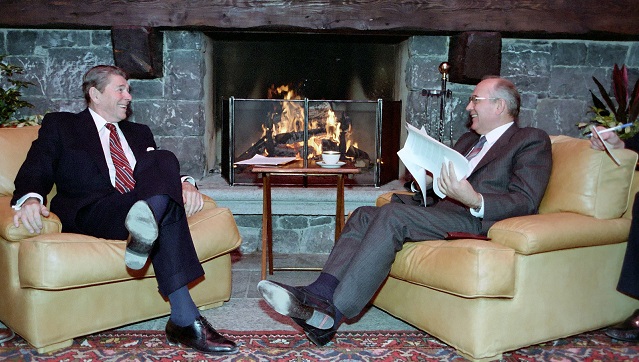 Mikhail Gorbachev, who oversaw the dismantling of the Soviet Union and was its last official leader, died at the age of 91 on Tuesday. While people in the West who lived through the end of the Cold War – especially East Europeans whose nations through off the shackles of communist dictatorships one after another at the end of the 1980s – remember Gorbachev as an enlightened leader who freed his own people, many also see him as a failed dictator who never intended to oversee the end of communism in Russia.

It is certainly true that Mikhail Gorbachev was a controversial figure who leaves behind a complicated legacy. He obviously never intended to see the end of the Soviet Union, not the end of communism. Gorbachev merely wanted to reform the system and work to repair Russia’s failed economy, which was in danger of collapse come the 1980s.

But one group of people who, to this day, remain grateful to Mikhail Gorbachev are the world’s Jews. This is especially so for those who were able to finally flee the Soviet Union and freely practice their religion only because Gorbachev opened the gates and allowed them to emigrate freely.

And what is more, Mikhail Gorbachev also allowed for more freedom of religious practice for Jews in the final years of the Soviet Union and he also acknowledged his nation’s history of anti-Semitism and tried to make amends for it. These last few measures were not necessary just to reform Russia’s failing economy.

This is why, while many people around the world might not be mourning Mikhail Gorbachev’s passing, nor eulogizing him as a visionary who ended a 70 year long dictatorship, freeing millions from the bonds of autocracy, many Jewish leaders have, however, come out with statements of respect for the late Russian President.

The President of Israel Isaac Herzog said of his passing, “Mikhail Gorbachev was one of the 20th century’s most extraordinary figures. He was a brave and visionary leader, who shaped our world in ways previously thought unimaginable. I was proud to meet him during his 1992 visit to Israel. Heartfelt condolences to his family and friends.”

William Daroff, CEO of the Conference of Presidents of Major American Jewish Organization, said in a Tweet, “Rest in peace, Mikhail Gorbachev, whose efforts to open Soviet society helped end the Cold War and the government’s persecution of millions of Soviet Jews, who could neither live openly nor freely emigrate.”

World Jewish Congress President Ronald S. Lauder said in a statement, “The World Jewish Congress mourns the death of Mikhail Gorbachev, a great statesman, an advocate for freedom and human rights, and a true friend of the Jewish people who through his actions enabled countless Soviet Jews to return to their heritage. I extend my deepest condolences to his family.”

It is too soon to see the full reaction to the announcement of Mikhail Gorbachev’s death. Many more Jewish leaders might also come out with criticisms, rather than condolences. And, of course, it will be up to the historians of the future who come long after anyone is left who actually lived through the Cold War Era to try and provide accurate and objective assessments of the man and leader that Mikhail Gorbachev truly was.