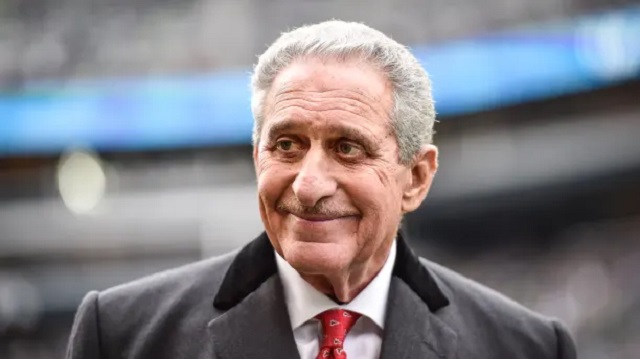 The NFL has 8 Jewish Owners of its 32 franchises. That is one-que4rarter of all NFL owners. While all of them are billionaires, none are as wealthy as Walmart heir Rob Walton, who just became the richest NFL team owner in the world ($40 billion net worth) with his $4.65 billion purchase of the Denver Broncos.

(Editor’s note: Not all team owners own the entire team or necessarily a majority stake in it.)

Here now is JBN’s list of the 5 wealthiest Jewish owners of NFL franchises.

5 – The Glazer Family – Tampa Bay Buccaneers
The late Malcolm Glazer bought the Tampa Bay Buccaneers in 1995 for a measly $192 million. His heirs now own the team and have a collective net worth of almost $5 billion. His son Joel Glazer is entering his 27th season overseeing the day-to-day operations of the franchise, along with other members of the Glazer family. He currently serves as the team’s Co-Chairman.

Joel’s brother Bryan Glazer is the team’s other co-chairman.

Perhaps best known as co-founder of The Home Depot, Arthur Blank is now widely recognized for his diverse businesses. Named by ESPN as the 2021 Sports Philanthropist of the Year, Blank is a tireless advocate of using purpose and profit hand-in-hand to benefit the communities around him. Blank has been distinguished by Forbes as one of the World’s 100 Greatest Living Business Minds in 2017, Sports Business Journal’s Executive of the Year 2018 and Sports Business Journal’s one of the 50 Most Influential People in Sports 2016, 2017, and 2018.

Ross made headlines recently when the NFL found the Dolphins’ violated league rules when the team spoke with Tom Brady in 2021 about coming to play for them while the star quarterback was still a player on another team. As a punishment, the NFL has stripped the Dolphins of a first-round draft pick in 2023 and a third-round pick in 2024.

Stephen Ross was personally fined by the NFL $1.5 million and suspended through Oct. 17 for his part in the infractions.

You can’t argue with success. Since he bought the New England Patriots in 1994 for $172, the team has won 6 Super Bowl championships, 10 AFC Conference championships, 19 division titles and made the playoffs a total of 22 times. The team is now worth $5 billion.

According to his official bio, a native of Brookline, Mass., Robert Kraft attended public schools before entering Columbia University on an academic scholarship. Upon graduation in 1963, he received a fellowship to attend Harvard Business School, where he earned a master’s degree in business administration. In 1968, he started his first packaging operation, and in 1972, understanding the importance forest products would play in the developing global economy, founded International Forest Products (IFP). With IFP, Robert created a platform that has grown into the Kraft Group, a diverse holding company that comprises the family’s various business interests.

Raised in a Jewish family in the Stanton Heights neighborhood of the East End of Pittsburgh, Pennsylvania, David Tepper made his money in investments and is a successful hedge fund manager. He bought the Carolina Panthers in 2018 for $2.2.

According to his official bio, as a kid, David Tepper played touch football in the streets and tackle football in a cemetery. Tepper attended an inner-city high school and went on to receive his undergraduate degree in 1978 from the University of Pittsburgh and his MBA from Carnegie Mellon University in 1982.

Tepper paid his own way through school and earned money as a short-order cook at a deli, selling knives door to door, working at a bakery, and stacking books in the library. Following his graduation from CMU, Tepper took a job at Republic Steel, a 100-year-old company. In two years, Republic Steel had to merge to avoid bankruptcy, and during that period they were trying to save the company, Republic did more finance deals than ever in its 100-year history. Tepper saw this as an opportunity, learning from each one of them valuable lessons that would stay with him for the rest of his career.