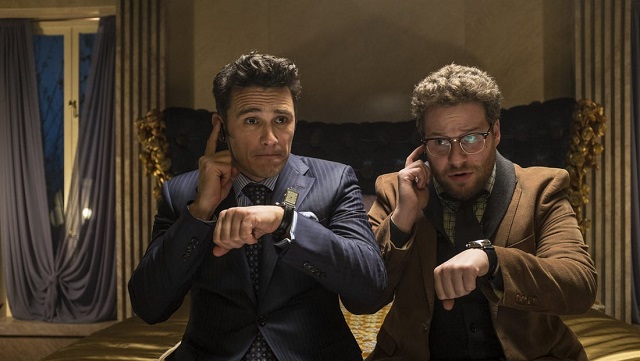 Seth Rogen and James Franco in The Interview

Disgraced actor and director James Franco is set to try and make a comeback of sorts. The Hollywood Reporter has revealed that Franco will appear in Bille August’s new post-WWII drama “Me, You.”

Based on the novel Tu, Mia by Erri De Luca, the movie will take place on a remote Italian island in the early 1960s. It will tell the story of a teenage boy haunted by memories of the war who falls in love with an older girl who holds a dark secret.

“I am excited to board this phenomenal project and to be working with the legendary Bille August. I’m a huge fan of his work, and Me, You is a truly brilliant script,” James Franco said in a statement.

Franco hasn’t been seen on camera since 2019. He was forced out of movie making for a while after he too was charged in the #MeToo movement. A number of women alleged that the actor had used his acting school as nothing more than a tool for taking advantage of them.

“In 2018, there were some complaints about me and an article about me and, at that moment I just thought ‘I’m gonna be quiet. I’m gonna be, I’m gonna pause.’ Did not seem like the right time to say anything,” Franco said as he remembered how it all unfolded. “There were people that were upset with me and I needed to listen. There’s a writer Damon Young and he talked about when something like this happens, the natural human instinct is to just make it stop. You just want to get out in front of it and whatever you have to do apologize, you know, get it done. But what that doesn’t do is allow you to do the work to, and to look at what was underneath.”

But in the lawsuit that was filed against him in 2019 by former students Sarah Tither-Kaplan and Toni Gaal, Franco was accused of having engaged in misconduct with students at his acting school called Studio 4. The school has since closed.

A year ago, James Franco agreed to a settlement in his sexual misconduct law suit. Franco and his co-defendants agreed to pay $2.2 million to the plaintiffs.