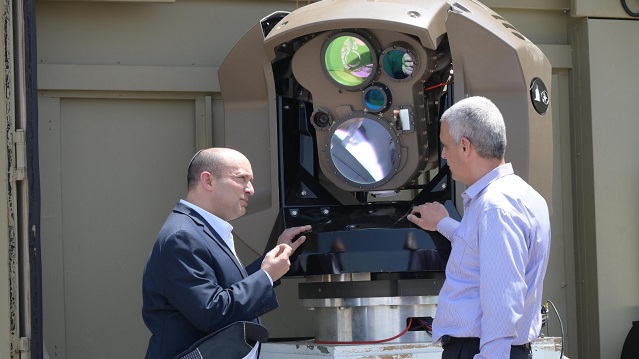 Prime Minister of Israel Naftali Bennett visited a Rafael facility in the north of the country where Bennett was briefed on the Iron Beam laser system.

This is a part of Israel’s renowned Iron Dome missile defense systems. The Iron Dome is so successful at shooting down rockets and missiles – like those Hamas shoots at civilian targets in southern Israel – that it has become the envy of the world. Even the U.S. military envies Israel’s advancements in defense tech.

In recent months three Arab nations, the United Arab Emirates (UAE), Bahrain and Morocco, all expressed an interest in acquiring Iron Dome technologies. And so did the Germans.

Rafael explains that the new Iron Beam tech was developed to meet the increasingly sophisticated airborne threats – including mortars, rockets, and UAVs as well as swarms of mini-UAVs.

These weapons and threats are confronting both military forces and population centers. Since current Kinetic interceptor systems are expensive and not always sufficient to counter some of these threats, powerful new solutions are required that meet the needs of this new reality, says the company.

Rafael’s Lite Beam is a 7.5kW HEL interceptor for C-mUAVs and ground targets such as IEDs and UXOs, neutralizing targets from a distance of a few hundred meters to up to 2000 meters.

The first proven prototype of LITE BEAM is already available. Any multilayer air defense array consists of a number of various types of interceptors. HEL may serve as a complementary interceptor, having the advantages of engagement at the speed of light, unlimited magazine, and negligible cost per interception.

Rafael President and CEO Maj.-Gen. (ret.) Yoav Har-Even, Chairman Dr. Uzi Landau and members of its senior management presented the heart of the classified systems that serve the Israeli defense establishment and afterward presented to the Prime Minister a variety of aerial defense systems during Bennett’s visit.

“Rafael’s laser system is a strategic game-changer for the State of Israel and the world as well, a system that already today knows how to shoot down mortar rounds, UAVs and rockets,” said Naftali Bennett after his tour.

The new Iron Beam technology also helps Israel, and any other nation that uses it, save a fortune on defense expenditures. Bennett himself went on to describe all of this as a game changer because Israel can now, “not only strike the enemy militarily but also weaken it economically. Until today it would cost us a lot of money to intercept every rocket. Today they can invest tens of thousands of dollars in a rocket and we can invest two dollars to cover the cost of the electricity in shooting down the rocket.”

“We are galloping forward towards our enemies in order to ensure security for the State of Israel,” added the Prime Minister. “We are now in a period of stable security but are strategically prepared – in every aspect – for any scenario.”