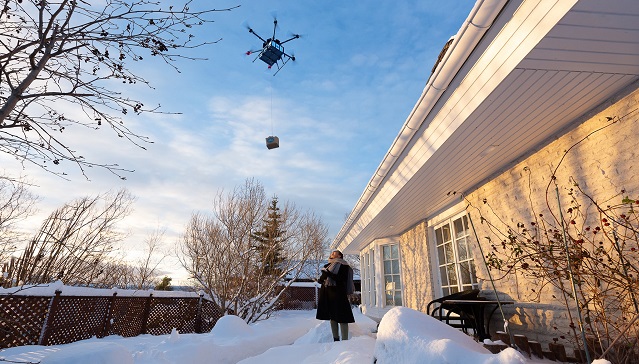 Yariv Bash‘s Flytrex is continuing to expand its drone delivery service, which is already the largest in the U.S. The company has now made a new deal with Unilever to deliver ice cream from the CPG giant’s “The Ice Cream Shop” virtual storefront.

(Editor’s note: Unilever is, of course, the company that recently joined the boycott against Israel, agreeing to pull its Ben & Jerry’s ice cream brand from the market there.)

Drones are the way of the future. Amazon is already moving over to their use for home deliveries. No more needing to send things through the mail which is getting ever the more unreliable. And drones do not get stuck in traffic as they fly through the air. So soon you can expect to see the sky filled with drones belonging to companies like Flytrex delivering pizzas, Chinese food, groceries and just about anything available for sale to people’s homes. As the technology progresses and the weight that a drone can carry increases, we may soon be seeing refrigerators or washing machines being delivered by drones.

“Through the new partnership with Unilever’s digital storefront, you can scream for ice cream and have it in just minutes,” said Flytrex CEO and co-founder Yariv Bash. “Why settle for a melted pint in an hour when you can have your ice cream via the skies, cold and delicious too?”

The Flytrex system was approved by ICETRA (Iceland’s Civil Aviation Authority) and insured, and set precedent after being granted approval to operate BVLOS (Beyond Visual Line of Sight) and above populated regions, in a first world country. Flytrex was also selected to participate in the FAA’S Drone Pilot Program, partnering with North Carolina’s Department of Transportation and taking on the challenge to establish the first drone based delivery service in the United States.

According to MoneyInc, prior to Flytrex, Yariv Bash was responsible for running SpaceIL, which would be the Israeli team in the Google Lunar X-Prize competition. The non-profit organization launched a robotic mission to the Moon. Bash served in the Israeli military’s artillery corps, where he was one of the people who contributed to the creation of Mahanet, which is a kind of creativity camp meant for Israeli soldiers. Essentially, interested individuals participate by creating something that is smart but useless, which is meant to let them exercise the creative parts of themselves.

And Yariv Bash is the grandson of Holocaust survivors. His grandfather was a Hungarian textile engineer sent to a Nazi concentration camp where he was forced to work on V1 and V2 rockets, which Germany used to bomb England late in the war.

About Flytrex and its solution to the home delivery problems for restaurants, Yariv Bash told Globes, “The current solution is just bad. It’s killing the restaurants. Just ask any restaurateur what they think about current delivery services and their cost.”

“They extort the maximum from the couriers,” he added. “Ultimately the customer also pays more, while receiving an erratic level of service. Add to that air pollution, traffic congestion, and fast-moving vehicles on the sidewalks and you get the current situation – a veritable catastrophe.”