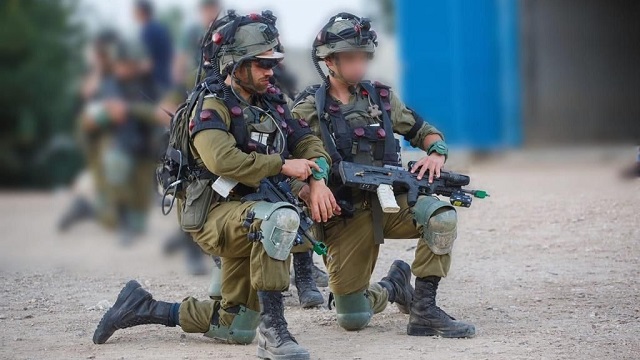 Elbit Systems, a major Israeli defense contractor, in cooperation with the Directorate of Defense Research and Development (DDR&D) in Israel’s Ministry of Defense, unveiled the “Edge of Tomorrow” program: the combat soldiers of the future.

“Edge of Tomorrow” is described as an innovative program that will strengthen the synergy between dismounted combat soldiers and their teams and enables optimal operational value through numerical and empirical processes based on research, simulation, live field scenarios, and more.

The DDR&D, at Israel’s Ministry of Defense, is a globally recognized center of knowledge and expertise in the field of military technology. The DDR&D contributes to the development, production and maintenance of the tools and technology used by the IDF and the entire defense establishment. Their work guarantees Israel’s ability to protect its civilians and maintain its qualitative military edge.

Elbit seems to want to connect the program with Tom Cruise. He starred in a movie of the same name about an alien invasion. But the Edge of Tomorrow is meant for fighting human enemies here on Earth and not extra-terrestrials. Or, perhaps, the Israeli government knows something that the rest of us do not.

Or perhaps Elbit is using the name Edge of Tomorrow because, as the company boasts, the program uses cutting-edge technologies that are integrated to improve a range of mission capabilities including lethality, situational awareness, survivability, stamina, cognitive load, enemy exposure, performance analysis and simulation, command and control, and more among combat soldiers in the IDF’s Ground Forces.

The term “cutting edge” is itself an interesting one. Why is it used to refer to anything that is the latest, whether in technological advancements or in music? Does it really cut? Maybe it should only apply to military technologies.

The DDR&D’s Department of R&D together with Elbit Systems, the program’s integrator, and additional defense industries recently demonstrated the program’s capabilities at an IDF training center. The demonstration incorporated networked warfare technologies and included a simulated force-on-force operational scenario. IDF soldiers from elite units incorporated the wearable technologies and demonstrated initial abilities in the fields of lethality, survivability, and increased synergy.

Lt. Col. Shlomi Buskila, Head of the LWSOF Branch in the DDR&D, said, “‘Edge of Tomorrow’ is an innovative program that is extremely unique thanks to our change in perspective. The program aims to enable optimal operational value for theground forces combat soldiers by strengthening the synergy between them and their team. The program incorporates a wide array of advanced technologies used by the soldiers and their teams, leading to a whole much greater than the sum of its parts.”

Haim Delmar, EVP & General Manager of C4I & Cyber at Elbit added that the purpose of this program is to equip combat soldiers, teams, and platoons with innovative capabilities that will significantly improve their survivability and transform their mission effectiveness.

“The technological solution that we have put in place is based on open architecture which enables the maximization of proven technology by Elbit Systems as well as by additional companies,” said Delmar of Edge of Tomorrow. He went on to state that the program will also incorporate technologies that were developed and adapted to address the needs of the future battlefield with special emphasis on urban warfare.