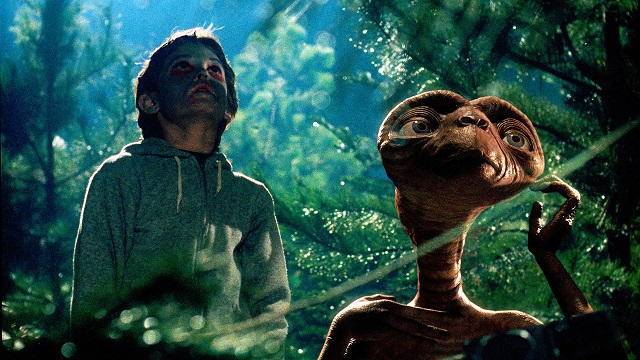 Steven Spielberg said that making the classic movie E.T. made him want to become a father. The multi-Oscar winning director made the comments last week at an event celebrating the 40th anniversary of the film held at the TCM Classic Film Festival.

With movies like Jaws, Close Encounters of the Third Kind and then Raiders of the Lost Ark, Steven Spielberg had already established himself as one of the greatest and most versatile directors that Hollywood had ever seen. But it was the release of E.T. the Extra-Terrestrial in June of 1982 that made Spielberg a legend.

E.T. tells the story of a lonely little boy. Elliot, with few friends who finds a lost alien trying to get back to his people. The movie is told from the perspective of the children – Elliot and his brother and sister and their friends – who help E.T. find his way home while hiding his existence from the grownups. It was also the first movie of Drew Barrymore who was only six years old when it came out.

The three time Oscar winner explained how his parents’ divorce influenced his ideas for making E.T. Steven Spielberg said, “What happened was, I had been working on an actual literal script about my parents’ separation and divorce.” That is what turned into the idea of the film’s protagonist, the little boy Elliot, being the son of a divorced mom.

One major revelation made by Steven Spielberg was how much the movie’s ending was changed. Originally, E.T. was supposed to stay behind on Earth. “I was shooting the (climactic) scene and I suddenly thought, ‘Wait a second. What if that little creature never went back to the ship? What if the creature was part of a foreign exchange program?”

But then the world would not have had that iconic line all throughout the movie where E.T. says over and over again “E.T. Phone Home.” E.T. would not have been looking to go home if he was supposed to stay on Earth and was not just stranded there.

Steven Spielberg also spoke about how he got the movie’s writer Melissa Mathison to agree to make E.T. with him.
“I pretty much had worked out most of the story and I needed a writer to write it with me, or write it just based on the story,” said Steven Spielberg. “I was shooting in Tunisia; we were shooting outside the Well of the Souls with Harrison, and Harrison’s girlfriend Melissa Mathison was there on location. I was just talking to her and I told her my ‘E.T.’ idea, the whole story. And she said, ‘I’ve retired from writing, I don’t write anymore. I’m not interested in writing anymore. It’s too hard.’ She turned me down.”

But Steven Spielberg would not take no for an answer. He lobbied Harrison Ford to talk to Mathison about it and the rest, as they say, was history.