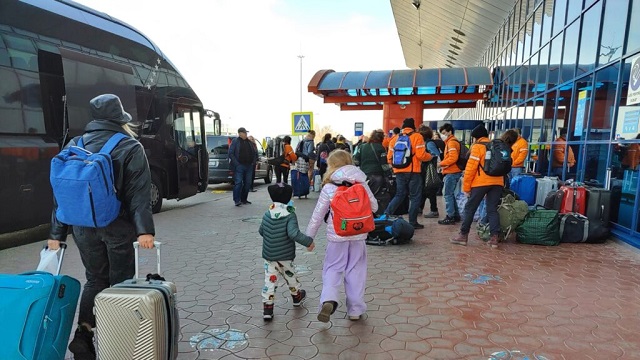 The Adelson Family, Dr. Miriam Adelson, the widow of the late Casino mogul Sheldon Adelson, who died at 87 in January 2021, and his children, has funded the flights of 500 Ukrainian refugees who found safety in Israel.

The flights, which were part of United Hatzalah’s Operation Orange Wings, brought the refugees from Chisinau, Moldova, and Iasi, Romania, to Israel over the past two weeks.

One of the people rescued was a woman named Irina, a Ukrainian refugee from Kyiv who arrived in Moldova by herself. Irina suffered from a complicated medical condition that required her to receive continuous medical care, which she was unable to receive in Kyiv since the start of the war, and during her travel to the border. Due to her condition, she was taken to a local hospital in Chisinau and requested from the hospital staff to go to Israel to be united with her son who lives in the Meir Shfeya Youth Village. Due to her condition, the staff at the hospital were unwilling to let her leave without supervised medical care, and they certainly weren’t willing to let her travel out of the country.

President and Founder of United Hatzalah Eli Beer spoke about the Adelson family’s generosity. “Thanks to the support of Adam, Matan, Sivan, and Patrick, children of Dr. Miriam Adelson and the late Sheldon Adelson, may his memory be a blessing, we were able to bring this woman and 500 other Jewish refugees to safety in Israel. Our teams provided the refugees with humanitarian aid at the Ukrainian border as well as inside Moldova, Romania, and other countries, and then we flew them to Israel onboard our specially chartered flights, while providing medical coverage throughout. Their support enabled us to save these people and bring them to safety and reunite not only Irina with her son but many other families as well.”