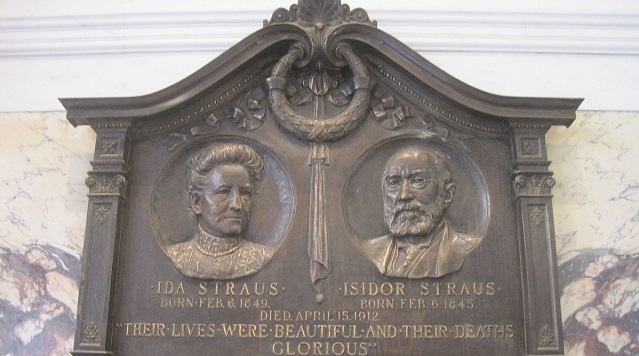 A watch fob that belonged to Isidor Straus, the historic Jewish American businessman man who made Macy’s into the Macy’s and who went down on the Titanic, will be on display at Pigeon Forge’s Titanic Museum in Missouri. It is valued at $250,000 and was found with Strauss’ lifeless body when it was pulled from the sea.

The fob, a charm for men’s pocket watches, is owned by Straus’ great-grandson, Paul Kurzman. Kurzman has loaned it to the museum.

“The locket was found tucked in the marketing mogul’s vest pocket when he was pulled, lifeless, from the sea,” said Mary Kellogg-Joslyn, COO and co-owner of the Titanic Museum Attractions in. “It has remained in the possession of Straus family descendants ever since, never to be seen by the public until now.”

“To me, this beautiful RMS Titanic artifact is important because it was witness to one of maritime history’s greatest disasters, as well as one of its greatest love stories,” she added

Isidor Straus was born in Germany in 1845 and moved with his family to America when he was 9 years old. After the Civil War, his father worked with Rowland Hussey Macy, founder of Macy’s, to allow L. Straus & Sons to open a crockery department in the basement of his store. By 1888, Isidor Straus was a partner with the company and in 1893 he and his brother Nathan had gained full ownership of R. H. Macy & Co. and turned it into the legendary powerful retail chain that it would become. Natahn had to settle for owning Abraham and Straus.

Straus also served less than one full term as a Congressman from NY. He won a special by-election to fill an empty seat and then chose to quit politics, not running again. Isidor Straus died on the Titanic when it went down on April 15, 1912

According to the legend, Isador Straus was offered a chance to escape the Titanic on one of the lifeboats. But only women and children were supposed to disembark and he refused to be given special treatment. Instead, Strauss went down on the Titanic with about 1,200 other people.

After Isidor Straus made his fateful decision, his wife Ida reportedly said, “I will not be separated from my husband. As we have lived, so will we die, together.” So Ida gave her maid her fur coat and let the maid take her place in the lifeboat. Some say that Isidor and Ida were last seen on deck arm in arm, but there is really no way to know for sure what really happened when the Titanic went down.