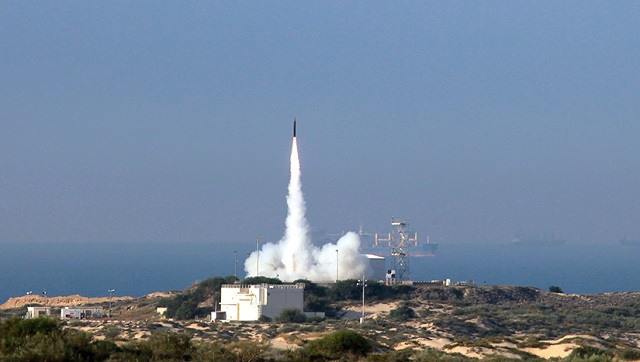 Germany is considering buying Israeli missile defense technology, specifically IAI’s Arrow 3 anti-missile system. This has been revealed by members of a German political delegation in Israel that includes people involved in defense.

Some would say that it is nothing short of a bizarre ironic twist of history that Germany would acquire defensive technologies from Israel. But there is nothing new about the defense relationship shared by the two nations who have cooperated on military matters for decades. And the Arrow 3 is a part of Israel’s world renowned Iron Dome missile defense tech.

In January, Israel conducted a successful test of the Arrow 3 system, which was done outside the Earth’s atmosphere. At the time, Israel’ Ministry of Defense stated that the operational radar arrays of the Arrow system detected the target and sent the data to the fire management system, which analyzed the data and fully plotted the interception. “Once the plans were completed, two Arrow 3 interceptors were fired at the target, and they completed their mission successfully,” it added.

Bundestag defense committee chair Marie-Agnes Strack-Zimmermann told DPA that concerns over Russian aggression, as evidenced by that country’s current assault on Ukraine, are a reason for Germany wanting to expand its missile defense capabilities with the Arrow 3. “Due to the threats and weapons systems that the Russians possess,” said Zimmermann, “we must examine options for defending Germany. The Israelis have working systems so it is logical not only to examine the various scenarios but also to procure them immediately. Everything must happen quickly but we must discuss this in a serious way.”

Andreas Schwarz of Germany’s Social Democratic Party which leads the nation’s current coalition government, echoed that sentiment. “We must better protect ourselves against the Russian threat. To do that, we need quickly an anti-missile shield for Germany,” he said. “For that, we need a protective umbrella for all of Germany. The Israeli Arrow 3 system is a good solution.”