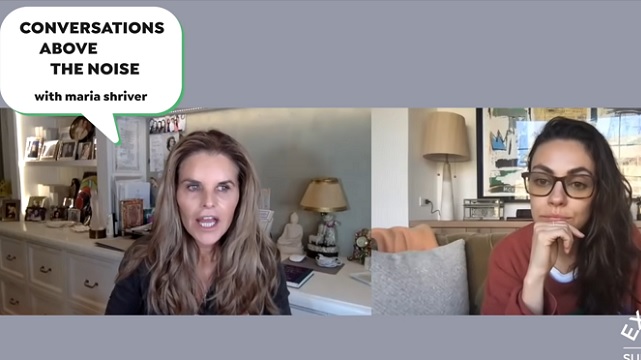 Mila Kunis Conversations Above the Noise

Mila Kunis wants people to know that the Russians are not to blame for what is happening in Ukraine. She also spoke about how she used to tell people that she was Russian because it was just easier. The Ukrainian born Jewish star of “That 70s Show” made the comments in an interview with Maria Shriver on her “Conversations Above the Noise.”

Mila Kunis and her husband Ashton Kutcher have donated $3 million to help Ukraine as it suffers under the Russian invasion. The couple pledged to match that much money in a fundraiser that they launched with a GoFundMe page for Kunis’ country of birth. In less than a week the campaign already brought in $20 million.

Ashton Kutcher said on Instagram, “Thank you to everyone that got us to $20m in less than a week. We can do this. We can hit our goal. Together. Because we stand together with Ukraine.”

On the Russian people Mila Kunis said that they are not the enemy. “I do really want to emphasize that. I don’t think that that’s being said enough in the press,” said Kunis. “I think that there’s now, ‘If you’re not with us, you’re against us’ mentality. And I don’t want people to conflate the two problems that are happening. I don’t think it’s the people of Russia, and so I don’t want there to be a thing of, ‘All Russians are horrible human beings.’ I don’t want that to be the rhetoric, so I do encourage people to look at it from the perspective of, ‘It’s the people in power, not the people themselves.’”
–

“It’s been irrelevant to me that I come from Ukraine. It never mattered, so much so that I’ve always said I’m Russian,” said Mila Kunis. But now she says, “Hell no! I’m from Ukraine.”

“This happens, and I can’t express or explain what came over me, but all of a sudden I was like, ‘Oh my God, I feel like a part of my heart just got ripped out,’” she said.