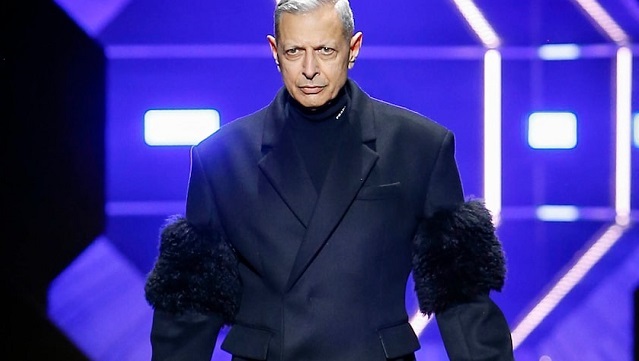 Jeff Goldblum is now a runway model. You heard that right. Jeff Goldblum, the actor known for playing the intellectual, scientist and all around witty guy is now also a male model.

You heard about how the Devil wears Prada. Well, now Jeff Goldblum wears Prada too. Goldblum made his male model debut on the runway the Prada runway in Milan, Italy, over the weekend.

The 69 year old actor has starred in some of the most iconic movies ever made. He was in the 1996 alien invasion movie “Independence Day,” the first “Jurassic Park” movie back in 1993 and several of its sequels, and he also starred in other sci-fi hits like “The Fly” in 1986. But Jeff Goldblum first came to fame as one of a gang of college buddies from the 60s who reunited after a friend’s death in the hit movie “The Big Chill.”

Seek a new career as a male model.
–

Goldblum also made his mark on television starring as the lead detective on two season of “Law and Order: Criminal Intent.” And these days he can be seen in a brilliant supporting role in the final season of “Search Party” available for live streaming on HBO Max.

Jeff Goldblum was joined on the runway by “Sex Education” actor Asa Butterfield, 24, “Love Actually” star Thomas Brodie-Sangster, 31, and “Twin Peaks” star Kyle MacLachlan, 62. So a variety of movie and TV show genres were represented there as well as multiple generations.

Taking theater and cinema as mirrors of reality, said Prada, for the the Fall Winter 2022 Prada men’s show by Miuccia Prada and Raf Simons, the Deposito of the Fondazione Prada is reimagined by AMO as a stage for action, a representation of a heightened actuality. “Actors are interpreters of reality, employed to echo truth through their portrayals,” says Prada.

“The collection celebrates the idea of working – in all different spheres and meanings,” said Prada. “Through these clothes, we emphasize that everything a human being does is important. Every aspect of reality can be elegant and dignified … elevated, and celebrated.”