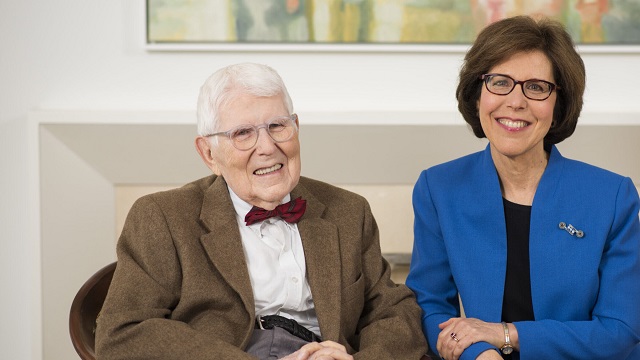 Dr. Aaron T. Beck, who pioneered the psychological field of Cognitive Behavioral Therapy, died in his home in Philadelphia at the age of 100. The methods Beck developed are in wide use today in the treatment of clinical depression and various anxiety disorders.

The American Psychologist has called him “one of the five most influential psychotherapists of all time.” He was an Emeritus Professor of Psychiatry at the University of Pennsylvania.

Beck also developed self-report measures for depression and anxiety, such as the Beck Depression Inventory (BDI). Together with his daughter, who is also a psychologist, Judith S. Beck, he founded in 1994 the nonprofit Beck Institute for Cognitive Behavior Therapy, which provides CBT treatment and training and conducts CBT research. Beck served as President Emeritus of the organization up until his death. Since its founding, Beck Institute has trained tens of thousands of health and mental health professionals in over 130 countries.

Dr. Aaron T. Beck was born on July 18th, 1921 in Providence, Rhode Island. He graduated from Brown University in 1942 and Yale Medical School in 1946. After training as a psychoanalyst, he became interested in the psychoanalytic construct of depression and eventually developed Cognitive Therapy (now known as Cognitive Behavior Therapy, or CBT) while working as a psychiatrist at the University of Pennsylvania. Since then, over 2,000 studies have found CBT to be an effective treatment for many mental health challenges and medical problems with psychological components.

The results of the first major clinical trial comparing CBT to antidepressant medication, which Beck conducted, were published in 1977, showing CBT to be the first talking therapy to be more effective than medication for the treatment of depression. After a second clinical trial in the UK replicated the results, Cognitive Behavior Therapy received international recognition and interest.

But CBT is not without its controversies. First, many researchers have criticized the methods used in the initial studies that showed that the process has positive results. Also, the rates of people showing progress from CBT have consistently dropped over the years. And people who are treated with the CBT method are shown to have a much higher dropout rate from therapy than people treated with the more traditional methods.

“My father was an amazing person who dedicated his life to helping others,” Beck’s daughter said in a statement. “He has inspired students, clinicians, and researchers for several generations with his passion and his groundbreaking work.”