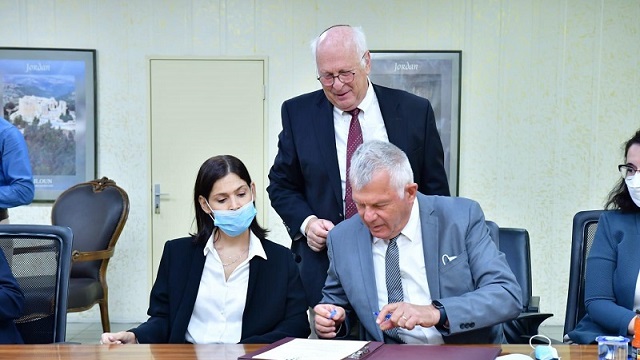 Israel has agreed to double its export of drinking water to Jordan. The amount exported should reach 100 million cubic meters over the next year. Israel, however, is also raising its price per cubic meter from $0.04 to $0.65. This amounts to a more than 1,500% rise in price.

Yes, Israel does export water to Jordan. Fresh water supplies have been a major cause of friction between the two countries for decades. Israel and Jordan signed a peace treaty in 1994. But it has been more of a cold peace over the years.

Jordan has been angry with Israel for its diverting of water from the tributaries of the Jordan River located in the Golan. This, Jordan says, deprives it of much of the country’s main source of fresh water.

And as the world gets hotter due to climate change, fresh water sources are being depleted. Hotter weather brings more drought and so countries have been pumping out more and more ground water in order to compensate. But this has led to even more draught and more underground water sources are becoming brackish, with higher salt content making them unfit for drinking.

Some, however, may wonder how Israel has enough water on hand to export. Well, Israel conducts major desalination projects from the Mediterranean. Jordan only has a small coastline along the Red Sea and is not yet as advanced as Israel in water technologies.

The agreement for the new terms was sealed when Israel’s Minister of Energy, Karin Elharar, and the Minister of Water of Jordan, Muhammad al-Najer, met in Jordan to sign a new agreement of the Joint Water Committee for Israel and Jordan (JWC).

The signing ceremony was also attended by the Israeli Ambassador to Jordan, Eitan Sorkis, the Jordanian Ambassador to Israel, Rassan al-Majali.

Minister Karine Elharrar said, “Signing the agreement to increase the amount of water is an unequivocal statement that we want good neighborly relations. I am full of hope that this is the first bud in cooperation between Israel and the Kingdom of Jordan that will benefit both people in coping with current challenges.”

Giora Shaham, Director of the Water Authority and Co-Chair of the Joint Water Committee, said, “The professional cooperation between Jordan and Israel within the Joint Water Committee allows us to formulate joint solutions to the challenges of the climate crisis and strengthen water relations between the two countries on the basis of good neighborliness and water management.”

“This represents the largest water sale in the history of the two countries,” says Gidon Bromberg, Israel director of the regional environmental group EcoPeace Middle East.