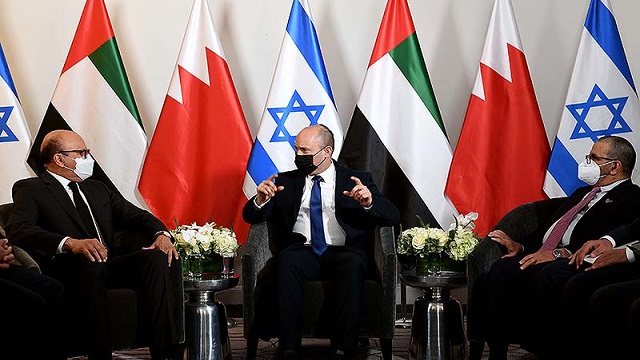 The Prime Minister of Israel Naftali Bennett is currently in New York for the opening of the new session of the U.N. General Assembly. Bennet will address the U.N. GA in the coming days, but for now, he is making the best of his time in New York by holding all manner of political and diplomatic meetings.

Last night Naftali Bennett met with the Bahraini Foreign Minister Dr. Abdullatif bin Rashid Al Zayani and UAE Minister of State in the Foreign Ministry Khalifa Shaheen Almarar. The three ministers, during their meeting, noted that the one year anniversary of the official signing of the Abraham Accords is coming up later this month. Prime Minister Bennett said that Israel aspires to tighten and strengthen relations with the UAE and Bahrain in all fields and added that he hopes that additional countries in the region will join the circle of peace.

The meeting came after the Prime Minister left Israel on a high note. Just before his plane took off for New York, Bennett heard the news that the U.S. House of Representatives voted in favor of counted funding for Israel’s Iron Dome missile defense system by a vote of 420 to 9.

Prime Minister Naftali Bennett commented, “I am so very happy to meet you. I felt it’s important that we meet to signal the year of the Abraham Accords, which from our perspective is very meaningful.”
–

Bennett also mentioned that he recently met with the King of Jordan and the President of Egypt, on separate occasions. He said that those two ladders of Arab nations that border Israel are “of course delighted with the ensuing relationship between our countries, and I want to assure you of continuity.”

“We are stable and we believe in this relationship, and we want to expand it as much as possible,” said Bennett about the Abraham Accords. After Bahrain and the UAE signed peace agreements with Israel, the Arab African nations of Sudan and Morocco followed suit just a few months later.