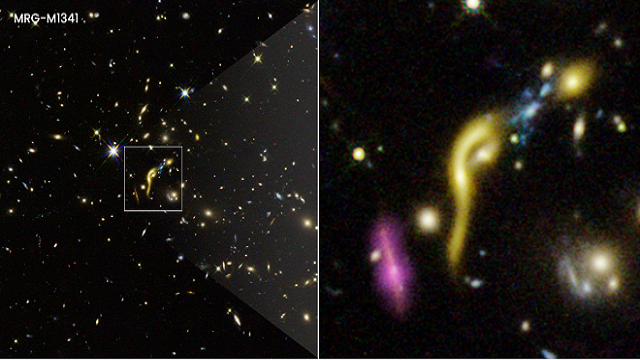 NASA, using its Hubble Telescope, has identified what it says are six dead galaxies. That must sound strange: How can a galaxy be dead?

Galaxies are comprised of millions of stars. For a galaxy to die, every single one of those stars would have needed to run out of the fuel that burns it and either gone super nova, or collapsed into itself. So the idea of an entire galaxy dying just does not compute. As Mr. Spock would say on Star Trek – “Fascinating!”

So, how did this happen?

Well these galaxies were among the oldest in the universe. So they had been around for so long that it is possible that they used up all of the gasses that fuel their stars.

NASA explains that when the universe was about 3 billion years old, just 20% of its current age, it experienced the most prolific period of star birth in its history. But when NASA’s Hubble Space Telescope and the Atacama Large Millimeter/submillimeter Array (ALMA) in northern Chile gazed toward cosmic objects in this period, they found something odd: six early, massive, “dead” galaxies that had run out of the cold hydrogen gas needed to make stars.

Without more fuel for star formation, these galaxies were literally running on empty. The findings are published in the journal Nature.

Hubble, together with ALMA, found these odd galaxies when they combined forces with the “natural lens” in space created by foreground massive galaxy clusters. The clusters’ gravity stretches and amplifies the light of the background galaxies in an effect called gravitational lensing. This phenomenon allows astronomers to use massive galaxy clusters as natural magnifying glasses to study details in the distant galaxies that would otherwise be impossible to see.
–

✨ Our own Milky Way Galaxy is home to plenty of spectacular cosmic views!

Take this week’s #HubbleFriday as an example. Called ESO 520-21, this densely packed collection of stars is located near the center of our galaxy.

The yellow traces seen in the photographs taken by Hubble show the glow of starlight. The artificial purple color traces cold dust from ALMA observations. This cold dust is used as a proxy for the cold hydrogen gas needed for star formation. Even with ALMA’s sensitivity, scientists do not detect dust in most of the six galaxies sampled.

One example is the galaxy MRG-M1341. It looks distorted by the “funhouse mirror” optical effects of lensing. In contrast, the purple blob to the left of the galaxy is an example of a dust-and-gas-rich galaxy. One example of the detection of cold dust ALMA did make is galaxy MRG-M2129 at bottom right. The galaxy only has dust and gas in the very center. This suggests that star formation may have shut down from the outskirts inward.

“At this point in our universe, all galaxies should be forming lots of stars. It’s the peak epoch of star formation,” explained lead author of the report Kate Whitaker, assistant professor of astronomy at the University of Massachusetts, Amherst. Whitaker is also associate faculty at the Cosmic Dawn Center in Copenhagen, Denmark. “So what happened to all the cold gas in these galaxies so early on?”

This study, says NASA, is a classic example of the harmony between Hubble and ALMA observations. Hubble pinpointed where in the galaxies the stars exist, showing where they formed in the past. By detecting the cold dust that serves as a proxy for the cold hydrogen gas, ALMA showed astronomers where stars could form in the future if enough fuel were present.

“By using strong gravitational lensing as a natural telescope, we can find the distant, most massive, and first galaxies to shut down their star formation,” said Whitaker. “I like to think about it like doing science of the 2030s or 40s – with powerful next-generation space telescopes – but today instead by combining the capabilities of Hubble and ALMA, which are boosted by strong lensing.”

So, the question remains, why did these galaxies die?

Whitaker proposes several possible explanations: “Did a supermassive black hole in the galaxy’s center turn on and heat up all the gas? If so, the gas could still be there, but now it’s hot. Or it could have been expelled and now it’s being prevented from accreting back onto the galaxy. Or did the galaxy just use it all up, and the supply is cut off? These are some of the open questions that we’ll continue to explore with new observations down the road.”