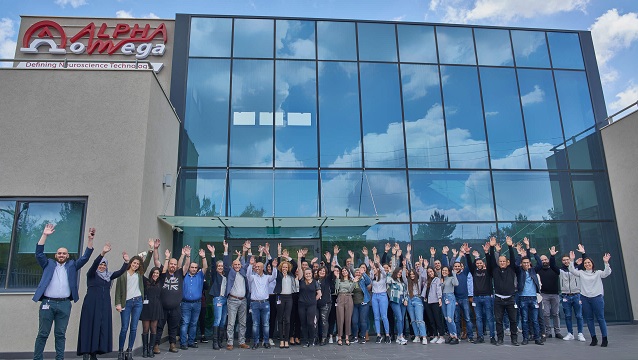 Alpha Omega is an Israeli medtech firm founded and run by Israeli Arabs. Startup Nation is all inclusive, comprised of people from every sector of Israeli society. Many of its success stories come from people who are not Jewish. Alpha Omega is just another example of how the success of Startup Nation helps bring new jobs and wealth to every corner of Israeli society.

Alpha Omega was established as a small engineering firm in Nazareth, Israel, in 1993 by the husband and wife team Imad and Reem Younis.
–

The firm started to develop systems and solutions for companies and scientists in the Neuroscience fields. Then, it strengthened its core-competence in the fields of neural recording and stimulation, and built the infrastructure of Alpha Omega to grow and prosper.

Today, in addition to the continued growth and development in the scientific and research field, the firm offers systems and technologies to support the clinical needs in Deep Brain Stimulation (DBS) procedures.

Alpha Omega offers a comprehensive neurosurgery system, with built-in analysis and visualization functions, designed to fit your needs and exceed your expectations, day after day, with the utmost precision and reliability.

The company boasts that it strives for the simplification of the DBS procedure by implementing sophisticated software and hardware for brain mapping and navigation to allow increased treatment productivity in Neurological and Psychiatric disorders, awake or asleep, resulting in better patient outcomes.

Alpha Omega works with Electrophysiologists, Neurosurgeons and Neurologists to make DBS simple, effective and affordable, with its Neuro Omega and Neuro Smart systems, HaGuide software and other navigation tools it continues to introduce new solutions to contribute to the patient’s healing journey.

“In most cases, treating neurological and psychiatric diseases is based on trial and error: the doctor tries a certain medication and examines what effect it has on the patient,” Imad Younis told Calcalist. “It’s really difficult, because you need to play around with the dosage, which sometimes causes side effects.” In order to overcome this challenge, researchers developed the Deep Brain Stimulation (DBS) process, a procedure that does not require medication in which a medical device – a neurostimulator complete with electrodes – is implanted in the brain and sends electrical impulses to specific areas of the brain. This stimulation could lessen worsening motor symptoms of neurological diseases like Parkinson’s disease or epilepsy.

Alpha Omega employs over hundred people, in all its business units around the world, in Israel headquarters, USA, Germany, and China.