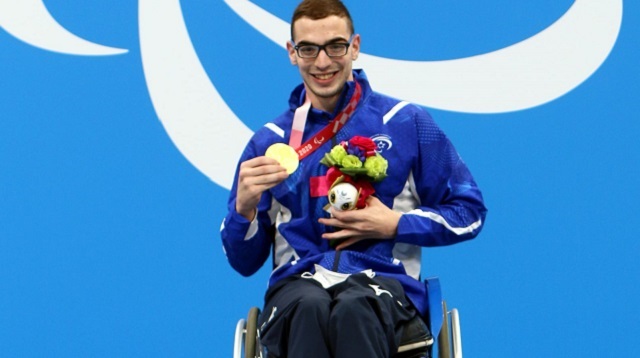 The 2020 Tokyo Paralympic games are bringing Israel gold. Israeli athletes have amassed nine medals at the games, six of which are gold.

Swimmer Ami Dadaon has three of Israel’s gold medals. Dadon took gold in the 50-freestyle relay and while finishing in 37.21 seconds and setting a new Paralympic record.

Dadaon began swimming at the Israel Association for Children with Disabilities [ILAN] in Israel. He took up swimming as part of his rehabilitation therapy. “Then I continued swimming as a hobby. I started to compete and I loved it, so I continued until I reached the youth [national] team,” he once said.
In December 2017 he received the Israeli Sports Award for Young Para Athlete of the Year.
–

Iyad Shalabi, an Israeli Arab, has won two gold medals in swimming. His second came on Thursday in the men’s 50-meter backstroke which he won with a time of 1:11.79.

When it rains it pours! two more Gold medals for team #ISR ! Congrats to Iyad Shalabi & Ami Dadaon for their 2nd Gold medal in the #Toyko2020 #Paralympics ! ????????‍♂️Israel now increased the number of medals to 9 overall! pic.twitter.com/tsHIwWjy6O

Israel’s first Gold medal of the 2020 games went to Iyad Shalabi. Shalabi is the first Arab-Israeli to win a medal at the Paralympics. Last week he came in first in the 100-meter backstroke with a time of 2:28.04.

Iyad Shalabi is 34 years old and comes from a Muslim family from the northern Israel town of Shfaram. Shalabi was born deaf and, when he was only 13 years old, became paralyzed in his lower body due to an accident. He is featured in a documentary called “Swimming Against the Current” that was shown at the 2017 Jerusalem Film Festival. The film follows Iyad and his father, Yusef, as they travelled to the 2015 World Championships in Glasgow, Scotland.

Mark Malyar also has three of Israel’s medals. Both Mark Malyar, and his twin brother Ariel Maylar, who is also competing in the Tokyo games, suffer from cerebral palsy. The two began their swimming careers at the age of five as part of their physical therapy.