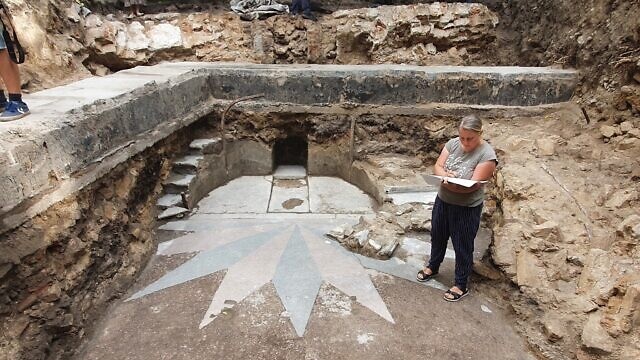 The excavation of the Great Synagogue of Vilna in Lithuania showing the area of the Torah ark and two flights of stairs destroyed by the Nazis and the Soviets, August 2021. (Jon Seligman Israel Antiquities Authority)

A great discovery was recently made in Vilnius, the Capitol of Lithuania. Two ritual baths, known as miqva’ot, were uncovered within the ruins of the Great Synagogues of Vilna. The synagogue was destroyed by Nazis during the Holocaust.

Now an archeological study of the ruins is being conducted jointly by a team of Israeli, Lithuanian and American archaeologists. The Israelis are from Israel’s Antiquities Authority.
–

It is unusual to think of something so recent as being the object of an archeological dig. When you hear the word archeology, you generally think of things from thousands of years ago, not less than a century. But archeology includes the study of anything from the past, even the recent past. Besides, who better to study the remnants of a destruction than an archeologist?

In July, the team unearthed the remains of two ritual baths that were used by congregants at the Great Synagogue in Vilna, today the capital of Lithuania. This synagogue, which was at heart of the Vilna’s large Jewish community for hundreds of years, was completely destroyed in the Holocaust, but evidence of underground spaces discovered in a study carried out last year led to the excavation of the site and the exposure of the ritual baths.

Ritual baths are used in Judaism for spiritual purification. Women are required to submerge themselves in a miqve after every menstruation cycle. People in general must do so if they have come into contact with anything impure, such as a dead body. Hasidic men take ritual baths regularly just to be sure that they are not impure.

And not just any bath can be used as a miqve. The water must come from naturally running waters. So a lake, a river and the sea can all be used as one. But not a shower.

The two Miqva’ot were discovered in July in the excavation led by Dr. Jon Seligman of the Israel Antiquities Authority, together with Mantas Daubaras of the Lithuanian Cultural Heritage Organization and Prof. Richard Freund of Hartford University. The two installations discovered are of the final phase of the Miqva’ot dated to the early 20th century. They have tiled walls and floors, steps leading to the pool and an otzar, an auxiliary pool in which water is collected for the miqve, in order to make it kosher for ritual purification.

In the words of the researchers, “These discoveries add a new dimension to the understanding of the daily lives of the Jews of Vilna, and will certainly provide a new focus for understanding the lost cultural heritage of the Jewish community of Vilna, the ‘Jerusalem of Lithuania’.”

Dr. Jon Seligman said “Most of the historical descriptions of the Great Synagogue in Vilna and the community courtyard (the Shulhoyf) relate to the Great Synagogue and the surrounding prayer halls. Until now, we have found little information about the bathhouse and Miqve building of the Jewish community, a community that comprised almost half of the city’s population.”