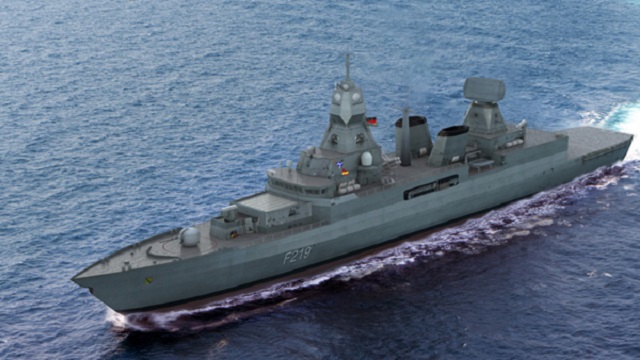 A rendering of an F124 frigate. (Photo Hensoldt.)

Israel Aerospace Industries (IAI) has signed a €200 million ($235 Million Deal) to supply new radar systems to the German Navy. IAI will upgrade the tech on board Germany’s F124 air defense frigates. The new contract will be carried out with German sensor solutions provider Hensoldt.

The order includes four Long Range and BMD digital AESA Radar sensor systems. Our cooperation begins the development of national capabilities in the field of Ballistic Missile Defense (BMD). This is the second time this month IAI and Hensoldt join forces to enhance German defense.

Hensoldt has also entered into strategic cooperation in the field of BMD-capable wide-range radars in S-band with IAI subsidiary ELTA Systems Ltd.

The Sachsen Class (F124) is Germany’s air defense frigate built by ARGE F124, a consortium consisting of Blohm and Voss. The design of the Sachsen-class frigate is based on that of the F123 Brandenburg class but with enhanced stealth features designed to deceive an opponent’s radar and acoustic sensors. The class incorporates an advanced multifunction radar APAR and a SMART-L long-range radar which is purported to be capable of detecting stealth aircraft and stealth missiles.

The F124 Sachsen is comparable to a destroyer.
–

For the 2nd time this month IAI and Hensoldt join forces to enhance German defense.

We are pleased to announce our collaboration in supplying new radars to the German Navy to modernize the F124 air defense frigates’ sensor technology, in a transaction worth 200 million euro. pic.twitter.com/wvgMYcq5G7

According to Naval Technology.com, the ship’s medium and long-range anti-air missiles are the Raytheon evolved Sea Sparrow missile (ESSM) and the Standard missile SM2111-A, which are fired from a VLS mk41 32-cell launcher. SGS Sachsen successfully completed firing trials with ESSM and SM-2 in July/August 2004.

The F124 has two rolling airframe missiles (RAM), mk31 launchers and two four-cell Harpoon missile launchers. Boeing Harpoon is an autonomous all-weather anti-ship missile with a range in excess of 65 nautical miles. The RAM missile from Raytheon and RAM Systems GmbH, is a fire-and-forget missile that provides short-range defense against incoming anti-ship missiles including sea-skimming missiles.

Under the new deal, IAI will refurbish the F124 frigate’s radars to overcome the obsolescence of electronics components.