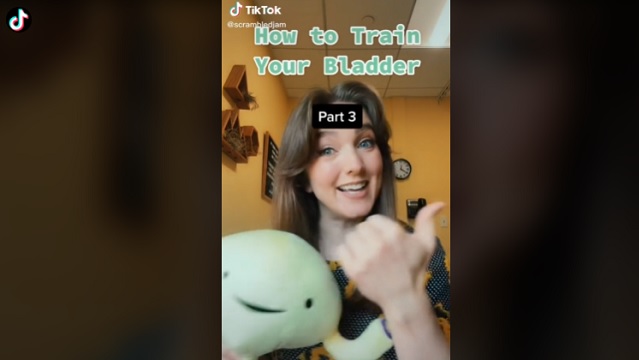 People really shouldn’t pee in the shower. Well, at least women shouldn’t. Not only that, but one should not step out of the shower, go to the toilet and pee while the shower is still running. This according to Dr. Alicia Jeffrey-Thomas who explained the dos and don’ts of peeing in a series of TikTok videos.

A member of the American Physical Therapy Association (APTA) as well as the APTA Section on Women’s Health, Dr. Jeffrey-Thomas loves helping patients see connections between the symptoms they are experiencing and the potential solutions they may have never considered. She is seeing patients in GBU’s Dedham Care Center.
–

Dr. Jeffrey-Thomas’s passion for pelvic health began during her undergraduate studies when she assisted in data collection for a chronic pelvic pain study at the University of Florida. As a student, she also published two systematic reviews of clinical measures for incontinence and sexual dysfunction in patients with urogynecological and colorectal cancers.

Since then, Dr. Jeffrey-Thomas has completed the full Herman & Wallace pelvic floor series and worked both in mentored roles and as the sole pelvic floor physical therapist in a geographically underserved region.

So, why shouldn’t you do it? After all, the pee will just run down the drain will all of that filthy shower water coming off of your body. And the continued water and soap will surely clean the shower floor of any remnants.

Well the reason for not doing so has nothing to do with hygiene, not shower etiquette. It is because if you go while the water is running then you might associate running water with peeing. As such, you might find yourself running to the bathroom every time that you hear running water.
“If you pee in the shower, or turn on the faucet or turn on the shower and then sit on the toilet to pee while the shower is running, you’re creating an association in the brain between the sound of running water and having to pee,” she said.

“Your pelvic floor isn’t going to relax appropriately, which means that you aren’t really going to be emptying your bladder super well,” added the doctor.

If you then pee a lot more often, you are doing so before your bladder is full, explains the doctor. This too trains your mind to tell you to pee more often since it is no longer waiting for a full bladder before doing so. So then you end up peeing a lot even when you do not hear running water.

“It’s not filling to full capacity. You’re peeing when it’s halfway full. So you may have the urge to pee more frequently because it’s only filling halfway,” she said. “You’re essentially sensitizing your body to work at lower volumes than needed.”