A new study from MoneyTransfers.com found that Israel came in ninth overall in the world in the area of foreign direct investment FDI. This comes as no surprise to anyone who has been following Israel’s high tech sector in the past 30 years. There is a reason why Israel has been nicknamed Startup Nation.

Billions in investments have been coming into Israel on an annual basis for decades. And with good reason: just look at all of those multi-billion dollar exits like the recent Sentinel One IPO.

And then there are all of the startups in Israel which hit billion dollar valuations, even before making their exits. These companies are known as unicorns. Israel has so many of these that it may be renamed Unicorn Nation.

So where is all of this money coming from anyway?

Well, MoneyTransfers.com explains that businesses and entrepreneurs alike understand that the best investment opportunities are not always in their home countries. This leads to outing available capital into ventures around the world.

MoneyTransfers.com analysed the latest data from the ‘Organisation for Economic Co-operation and Development (OECD)’ to establish which countries in the world benefited the most and least from inward FDI in 2020.

MoneyTransfers.com found that China was the largest beneficiary of inward FDI in the world last year (2020) at a colossal $212.5 billion. A 14% increase from the year before (2019), where FDI inflows into the country equated to $187.2 billion. 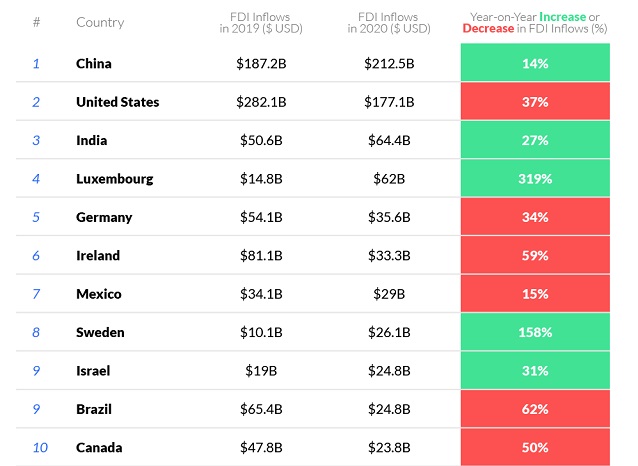 In second place is the United States who were the second biggest recipients of inward FDI in 2020 at $177.1 billion. Despite such a hefty sum, it represented a 37% fall in FDI inflows in contrast to 2019, when accumulative inward FDI was $282.1 billion.

Israel is in joint ninth position, as inward FDI in the country was a sizeable $24.8 billion in 2020. This also meant that FDI inflows in Israel rose by 31% when compared to the collective $19 billion inward FDI that was made in 2019.

Here are some of the details:

China was the largest beneficiary of inward FDI in the world in 2020 at a colossal $212.5 billion.

Overall, 28 out of the 37 countries reviewed for the research adversely experienced a year-on-year decrease in inward FDI in 2020. Given the worldwide turbulence and economic uncertainty the Covid-19 pandemic caused last year, businesses and entrepreneurs alike were perhaps much more hesitant than ever before about investing outside of their domestic borders.