The average American today is addicted to their smartphone. This is according to a report published by Reviews.org.

This should really come as no surprise to anyone.

Did you ever see the movie “Clueless?” Well, that film came out back in 1995, when few if any, people had a cell phone yet. That may be hard to believe for some younger readers, but it is, in fact, true.

Alicia Silverstone played a teenage high school kid. In one scene she can be seen walking down a hallway, talking to her friend on her phone. The friend is also shown talking and walking in a different hallway. Well, the two halls converge and the girls end up walking alongside one another. But they continue to speak over their phones for a few moments before they realize that they are now standing next to each other.

That got a big laugh, back then. But today it is the norm.

And this is where the new study reveals that Americans are at.

From the moment they wake up to the time they go to sleep, Americans stay glued to their phones. They’ll even resort to texting someone in the same room instead of talking to them. 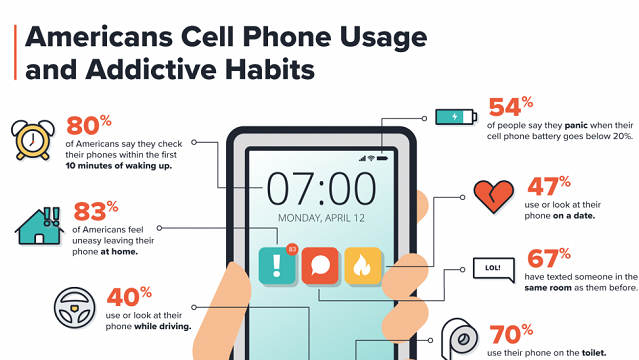 As if that is not enough, 67% of Americans say they have texted someone in the same room as them. Now that one might be OK if it is done as a joke or a way to keep someone else from knowing what you are talking about.

Nearly half of Americans will admit that they are addicted to cell phones, and 43% say that it is their most valuable possession.

Now the question here is: how many people will see this as a problem? Is criticizing the situation just making a moral judgment, or is the situation truly something that needs to be a cause of concern?

Your answers to the above questions are most likely determined by your age.