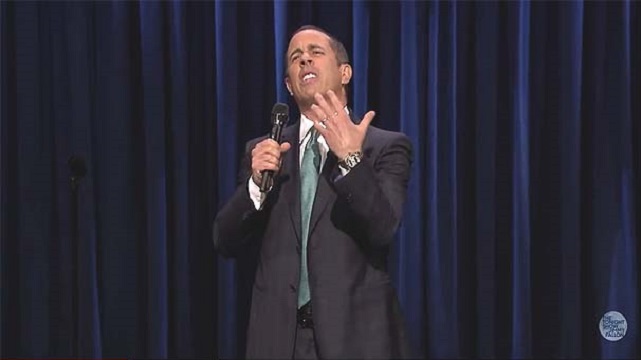 Jerry Seinfeld on The Tonight Show

So what happened now? Well it’s the Olympics. Did Jerry Seinfeld troll American gymnast Simone Biles on Twitter? Did he say something about another Olympic athlete that 0.003% of the world population found to be in some way offensive or insensitive and require that he be cancelled? No! He just made fun of the medals in an old comedy special.
–

After “Seinfeld” made its last bow, Jerry Seinfeld had one last big comedy special in 1999 aptly titled “I’m Telling You for the Last Time.” Now a clip from that special has won the internet and social media gold medal by going viral.

So, what did Jerry say? He made fun of winning the Silver medal at the Olympics, believe it or not.

“You win the gold, you feel good,” explained Seinfeld during the comedy bit. “You win the bronze, you think, ‘At least I got something, But if you win that silver, that’s like, ‘Congratulations, you almost won.’ Of all the losers, you came in first of that group. You’re the No. 1 loser. No one lost ahead of you.”

Jerry Seinfeld also wondered aloud how the athletes can deal with losing by the slimmest of margins, like on one thousandth of a second. “Wow congratulations Silver medal,” he continued, “Did you trip? Did you not hear the gun go off?”
–

Jerry Seinfeld went on to call the biathlon at the winter games, which combines skiing and shooting a rifle into one competition, the dumbest Olympic event of them all. He said that this makes as much sense as combining swimming and strangling a guy when the race is over.