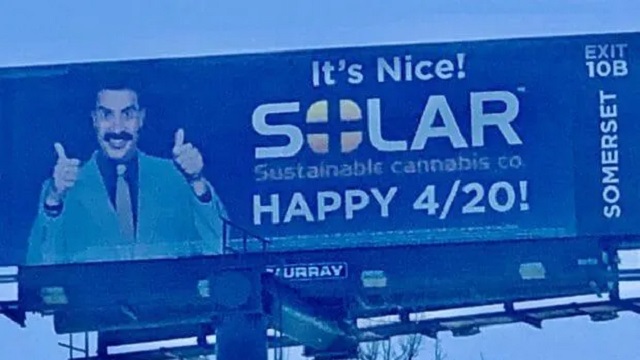 Sacha Baron Cohen has filed a lawsuit against Massachusetts-based Solar Therapeutics alleging copyright infringement and false advertising, Sacha Baron Cohen asserts that the Cannabis company did not get permission to use Borat images in a billboard.

The lawsuit seeks $9 million in damages. The billboard at issue appeared above a busy highway in the Boston area. It had an image of Borat with the famous character’s catch phrase “It’s Nice!” But according to court papers filed by Sacha Baron Cohen’s attorneys the actor never authorized the use of the “portrait, picture, image, likeness, and persona of Baron Cohen and the Borat character” in any way.
–

“By use of the Billboard, the Defendants falsely have conveyed to the public that Mr. Baron Cohen has endorsed their products and is affiliated with their business,” attorney David Condon wrote in the complaint. “To the contrary, Mr. Baron Cohen never has used cannabis in his life. He never would participate in an advertising campaign for cannabis, for any amount of money.”

Sacha Baron Cohen adamantly denies ever even having used Cannabis himself. In spite of marijuana now becoming legal in more and more places, the actor states that he feels that pot is not a “healthy choice.”

The lawsuit also states that, “Cannabis remains a controversial product that Mr. Baron Cohen has no interest in endorsing, promoting or advertising. In addition, Mr Baron Cohen was born into an Orthodox Jewish family;” it adds, “he is an observant Jew; and he is proud of his cultural heritage. He does not wish to be involved in the heated controversy among the Orthodox Jewish community about whether cannabis can be used under Jewish traditions, customs, and rules.”
–

It is not clear, however, who exactly in the orthodox Jewish community has condemned the use of marijuana where it is legal.

The suit also states that the defendants, Solar Therapeutics, “took a gamble” that Sacha Baron Cohen would never learn about the billboard, “guessing they could copy and use Mr. Baron Cohen’s image without ever having to pay for it.”

Therein lies the big question here – what the hell were they thinking? Should we just come right out and say it? Maybe these people have just been smoking a little too much of their own product and so did not even consider the consequences of not getting Sacha Baron Cohen’s permission for the ad.