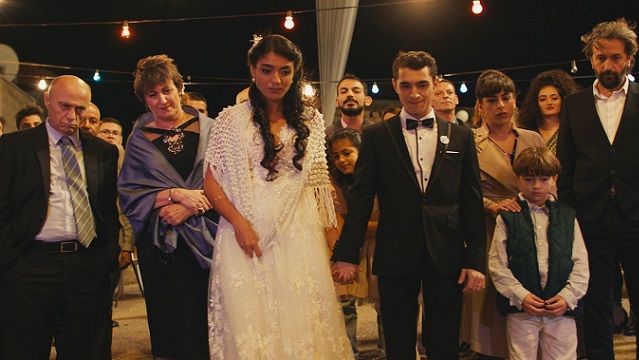 Let There Be Morning (promo clip)

“Let It Be Morning” is a new Israeli movie premiering at the Cannes Film Festival in France this week. But the film’s Arab cast members have decided to boycott the festival because “Let it Be Morning” was entered into the competition as an Israeli movie alone, and not as a joint Israeli-Palestinian production. They apparently do not like being called Israeli and consider themselves to be living under an occupation, even within Israel’s pre-1967 borders.

Let There Be Morning tells the story of Sami, who is played by Alex Bachri. Sami thought he found his place in life, but then, without any conceivable reason, the Arab village where he grew up is suddenly surrounded by an ominous wall. Now he is forced to deal with questions of identity and national belonging. The filmmakers describe this story, based on what happened when Israeli construction its separation barrier around the West Bank, a “bitter sweet comedy about a state of siege, both internal and external and about a man who built a wall around his heart, and how that walls starts coming apart when another, more real wall is built around the village where he was born.”

The movie is directed by Israeli filmmaker Eran Korlin. But it has an Arab Israeli cast which includes Salim Dau, who is famous from programs like “Fauda,” and Juna Suleiman. And these cast members identify as Palestinians and are angry that the movie is being called an Israeli film.

The cast members issued a joint statement saying, “We are proud and stand behind our participation in the film of our friend and ally, Eran Kolirin. And yet we cannot ignore the contradiction that stems from the fact that the film was accepted to Cannes under the ‘Israeli Film’ Category.” Someone might want to remind these people that they live in Israel and the movie was filmed in Israel. While in Arabic, that language is one of Israel’s official languages. The movie was also produced with the aid of the Israel Film Fund.

The Israel film fund was established in 1979 answering the need to create a public fund that will support Israeli filmmakers to realize their vision and talent, primarily supporting “art house” movies. But the actors seem to feel that they are the victims of colonization and have no appreciation that an Israeli organization funded their work.

The actors also said, “Each time the film industry assumes that we and our work fall under the ethno-national label of ‘Israeli’ it further perpetuates an unacceptable reality that imposes on us, Palestinian artists with Israeli citizenship, an identity imposed by Zionist colonization to maintain the ongoing oppression of Palestinians inside historic Palestine; the denial of our language, history and identity.”

If this is how these actors really feel then maybe they should not have made this movie in the first place. After all, was their participation not an act of collaboration with a colonial occupier? Maybe they should boycott the Israeli film industry in its entirety.

Director Eran Korlin responded positively to the actors’ decision in a Facebook post. “I love these people. Respect their decision,” he wrote, “(though I still wish they would have come, to celebrate their art with me) and support their struggle. Thanks for the kind words, beautiful cast.”

Korlin explained that the film had to be listed as Israeli because it was made by the Israeli Film Fund. But he is not happy about this telling Deadline, “Why does the state want you to declare what is obvious? As if I don’t know who I am and I have to erase the other guys’ identity… I don’t want this film to be used as whitewashing of anything that has been done, the things that are done are terrible.”