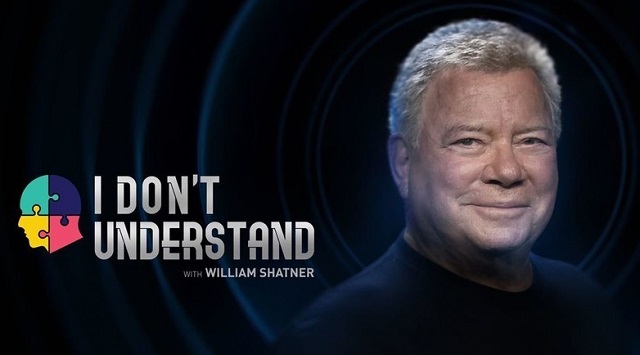 William Shatner, best known as Captain James T. Kirk of the Starship Enterprise on Star Trek, has a new television show on a Russian state-run TV network. No joke! William Shatner will host a talk show called “I Don’t Understand” on the English version of Russian government run TV channel RT. But don’t be critical; Captain Kirk isn’t taking any guff about his new job.

“I Don’t Understand” will feature William Shatner seeking the answers to what he feels are fascinating and timely questions that “pique the natural interest of everyone, but that the establishment media all too often hesitates to tackle.” These include such important topics as “should I worry about space debris falling from the sky?” to “are we alone in the universe?” to “what is dark matter?” to “what was before the Big Bang?”
–

Some people just don’t know the meaning of the word retire. William Shatner is 90 years old now and, like the Energizer Bunny, he just keeps going and going and going. Shatner certainly keeps his good spirits up. He quipped to The Guardian in a recent interview “The press has spread this ridiculous rumor. I’m 55.” He then begrudgingly admitted to being 90 years old after it was pointed out that he was on Star Trek 55 years ago.

So why does William Shatner look so young? Well it’s not because of magic, or anything like that. “Ha! Well, I don’t have any secret potions,” he told The Guardian. “It must be genetic. I ride a lot of horses and I’m into the bewilderment of the world, so I open my heart and head into the curiosity of how things work.” But Shatner did not rule out the possibility that he may have sold his soul to the Devil.

About his new show, William Shatner said in a statement, “I have often pondered the questions we should be asking, but perhaps aren’t. Just how much stuff is in space? When I really think about it, I realize that I don’t understand anything. So, I’m going to ask questions no one else is on TV, and we’ll see if we can take a journey to enlightenment together.”

Executive producer of the show and the head of the company Mikhail Solodovnikov said, “We are very proud to bring the inimitable talent of William Shatner to our network and digital platform Portable.TV. It is a show for the curious intellectual who would rather be educated than entertained by a TV show.”
–

But Russian critics are not so happy for Shatner. Alexey Kovalev, a writer for independent Russian news service Meduza, is one of them. He tweeted a condemnation of both RT and William Shatner writing, “Quick reminder about [RT’s] views and editorial policies @WilliamShatner is now endorsing (whether he wants to or not). Don’t go on RT, unless you are okay with sharing a mic with some of the most vile racist degenerates out there. It’s not a legitimate media platform. It has no redeeming qualities. And if no other platform will have you, then you really shouldn’t have *any* platform.”

Clearly angry with all of the criticism, William Shatner Tweeted, “Perhaps instead of rebuking me with facts that have zero influence on my show; a better use of your time @Alexey__Kovalev would be to move? It would seem that you being in Moscow means you are directly supporting via taxes the very regime you are berating me about.#Hypocrite.”

But Shatner has been placed on the defensive, so to speak. He tweeted an explanation, of sorts, saying, “I made a TV program and they bought the distribution rights to it.”