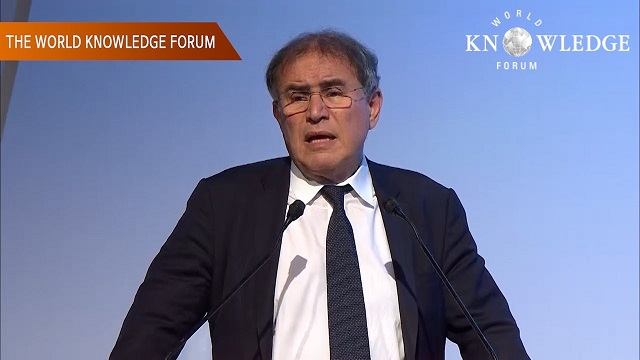 Nouriel Roubini, a world renowned economist, is worried that the world is about to suffer a global financial crisis to rival the one which came in 2008 after the sub-prime mortgage meltdown. The main problem, says Roubini, is the current rate of inflation. Roubini explained his concerns in a column published by Project Syndicate.

Nouriel Roubini was born in Turkey to Iranian Jewish parents in 1958. The Harvard educated economist teaches at New York University’s Stern School of Business and is chairman of Roubini Macro Associates LLC, an economic consultancy firm.
–

After the crash of 2008, Nouriel Roubini says that governments failed to deal with the underlying causes of the economic crisis and merely “kicked the can down the road.” This, he said, made another crisis inevitable. And now, says Roubini, that crisis has arrived and the risks are growing of a “train wreck” stock market crash and stagflation. He sees only a “U” shaped recovery, sending the economy back into the Covid recession later this year. Roubini expects a full on depression by the end of the decade.

“While there is never a good time for a pandemic, the COVID-19 crisis has arrived at a particularly bad moment for the global economy. The world has long been drifting into a perfect storm of financial, political, socioeconomic, and environmental risks, all of which are now growing even more acute.”

Roubini believes that the Covid crisis has shown the need for more public spending on health care overall. He calls this a “necessity” and not a “luxury.” And because of the aging populations in the developed world, such expenses for retiree’s healthcare will only grow in the future.

Another problem cited by Roubini, is what he sees as the growing risk of deflation. Deflations is when prices plummet due to lack of demand or over-production. So manufacturers lose money, and so they cut jobs, and this results in fewer peope who can afford their goods, thereby continuing a downward spiral into depression. This is exactly what happened at the start of the Great Depression.
–

Conditions are ripe for repeat of 1970s stagflation and 2008 debt crisis. Warning signs are there for global economy, and central banks will be left in impossible position by Nouriel Roubini https://t.co/dHPgjyFSIS

Nouriel Roubini explains that, in addition to causing a deep recession, the crisis is also creating a “massive slack in goods (unused machines and capacity) and labor markets (mass unemployment), as well as driving a price collapse in commodities such as oil and industrial metals. That makes debt deflation likely, increasing the risk of insolvency.”

As for inflation, Nouriel Roubini told Yahoo Finance that he is, “on the side of those who believe that the rise in inflation is not going to be temporary, is going to be more persistent. We have a massive monetary and fiscal stimulus, much bigger and more protracted than we had after the global financial crisis.”

Saying that there will be continued inflation while at the same time that there is a risk of deflation is not contradictory. Deflation could very well follow a period of inflation.