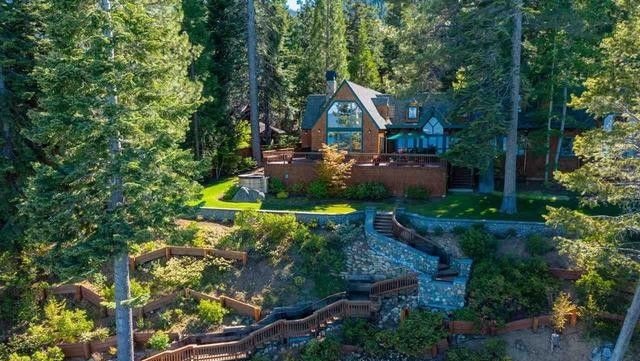 Senator Dianne Feinstein is selling her Lake Tahoe estate for $41 Million. The California democrat is America’s oldest serving senator at 88 years of age. The estate, which belongs to Feinstein and her husband Richard Blum, includes three separate homes. But the asking price is $5 million less than the $46 million reportedly asked for in 2020.

The property reportedly cost $9.7 million when it was purchased in 2007, but has since had new structure built there.

The estate is listed under the LLC, Lucky Bluff, which is connected to Richard Blum’s investment management firm, Blum Capital.

Combined, the three homes hold 10,343 square feet of space spread out over 4.75 acres of land. The homes have seven bedrooms and seven bathrooms.

According to Realtor.Com, the property is located on Lake Tahoe’s picturesque West Shore. The estate was last renovated in the 1990s. The property includes a 278 foot stretch of white sand beach, as well as a 172-foot pier which stretches out into the water. There is also a boatlift and two buoys.

Realtor.Com says that the multiple residences provide “grand entertainment capability” and that the acreage offers “privacy for guests and homeowners alike, with meandering paths leading to each residence.”

The main house has cabin style features and offers an open plan. The living room boasts a stone surround fireplace and a dining area that opens to the deck. There is an open kitchen which adjoins the living and dining areas. The kitchen has bar seating, stainless-steel appliances, a center island and built-in cabinets and a pantry for plentiful storage.

The Rubicon Pavilion is a guest suite in the estate and was built in 2015. It comes with a small kitchen and outside BBQ for al fresco dining. According to the listing this house was designed for “special guests” and influenced by a Buddhist stupa. Floor-to-ceiling glass windows showcase the lake beyond the large stone patio with a fire pit.

The property also has a two car garage with a Tesla charger.

In this article:Finance, Dianne Feinstein