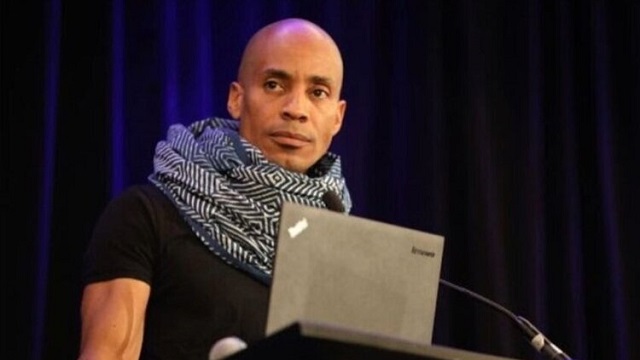 Kamau Bobb has been removed by Google from his position as head of global diversity strategy. The move came shortly after it was revealed that Mr. Bobb had made seriously anti-Semitic comments, including that Jews have an “insatiable appetite for war.”

The Washington Free Beacon first unveiled the comments which Kamau Bobb made in a blog post in 2007. In the post titled “If I Were A Jew,” Bobb described how he believed Jewish people should view the Middle East conflict. “If I were a Jew I would be concerned about my insatiable appetite for war and killing in defense of myself. Self defense is undoubtedly an instinct, but I would be afraid of my increasing insensitivity to the suffering [of] others.”

“If I were a Jew today, my sensibilities would be tormented,” added Bobb. “I would find it increasingly difficult to reconcile the long cycles of oppression that Jewish people have endured and the insatiable appetite for vengeful violence that Israel, my homeland, has now acquired.”

Interestingly, as of this posting the blog section of Mr. Bobb’s personal website is not accessible.

In a statement Google said that the company, “condemned the past writings by a member of our diversity team that are causing deep offense and pain to members of our Jewish community and our LGBTQ+ community.”

“These writings are unquestionably hurtful,” the statement added. “The author acknowledges this and has apologized. He will no longer be part of our diversity team going forward and will focus on his STEM work.”

Oh the irony! So the guy who Google entrusted with promoting diversity at the company is himself a hateful bigot.
–

We agree with @simonwiesenthal and call for this antisemitic bigot to be immediately fired @Melonie_Parker!

Furthermore, an investigation of HOW this obscene man got this particular job in the first place needs to happen @sundarpichai. https://t.co/arYrN53Dsr pic.twitter.com/TzWmlm2bcB

And as if the above blog comments were not enough, Kamau Bobb also wrote, “I don’t know how I would reconcile that identity with the behavior of fundamentalist Jewish extremists or of Israel as a nation. The details would confuse me. I wouldn’t understand those who suggest that bombing Lebanon, slaughtering Lebanese people and largely destroying Beirut in retaliation for the capture of a few soldiers is justified.”

“I wouldn’t understand the notion of collective punishment, cutting off gas, electricity and water from residents in Gaza because they are attacking Israel who is fighting against them. It would be unconscionable to me to watch Israeli tanks donning the Star of David rumbling through Ramallah destroying buildings and breaking the glass,” he also wrote.

According to his own website, Kamau Bobb is the founding Senior Director of the Constellations Center for Equity in Computing at Georgia Tech. He is an engineer and science and technology policy scholar whose work focuses on the relationship between equity in the STEM enterprise, large educational systems, and the structural conditions that influence contemporary American life. Dr. Bobb holds a Ph.D. in Science and Technology Policy from Georgia Tech and M.S. and B.S. degrees in Mechanical Engineering from the University of California, Berkeley.

His personal bio makes no mention of his feelings about Jews.

In this article:Finance, Google Inc