Entertainment tycoon Barry Diller is hopping mad with Apple for the high fees that he says the company charges app makers for the use of their app store. In an interview with CNBC, the founder and chairman of media conglomerate IAC also griped about cryptocurrencies, calling them a con. On the bright side, Diller also spoke about why he funded a new $26 million park in New York and how he thinks that Netflix has already won the streaming wars.

Forbes estimates Barry Diller’s worth at $4.3 billion. Before starting his own companies, Diller worked at ABC, Paramount and Fox and oversaw launches of hit TV shows including “Cheers” and “The Simpsons.” He is also is also chairman of online travel giant Expedia and is married to designer Diane Von Furstenberg.

The park, which sits in the Hudson River just to the west of Manhattan’s West Side Highway, is actually a 2.4 acre island called “Little Island.” Funded by the Diller Von Furstenberg Family Foundation, the park sits atop what was once known as Pier 54. The lower west side of Manhattan along the Hudson was once covered with shipping piers back when people still traveled overseas by boat. But the piers were mostly torn down over the years.

“What was in my mind was to build something for the people of New York and for anyone who visits—a space that on first sight was dazzling, and upon use made people happy.” — Barry Diller

The new park, which opened on Friday, is actually a platform of grass, trees, and winding pathways mounted on concrete piles where the pier once stood. Rising from the remnants of Pier 54, Little Island sits on a site that has played a pivotal role in the story of the Hudson River and its surrounding communities. Every visit to Little Island is a reminder of the dynamic evolution of New York City’s waterfront. 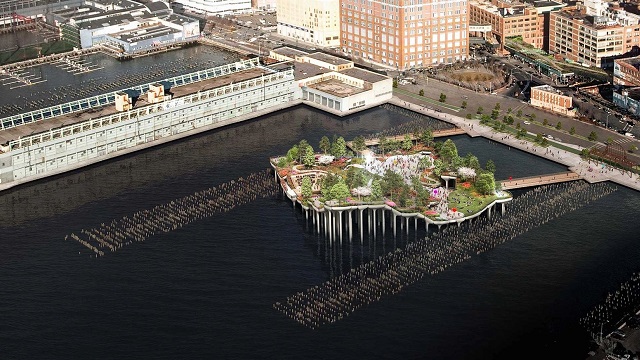 “Given how many revolutions this went through, from starting to dying and starting again, I was actually awestruck when I could actually look up and see it,” Mr Diller told WSJ. Magazine: “I walked on and felt pure, actual joy, which is not something I can say happens very often.”

In 2013, the now 79 year old Barry Diller’s Diller-von Furstenberg Family Foundation, in partnership with Hudson River Park Trust leadership, embarked on the unique opportunity to envision a solution for the repair and reactivation of Pier 54, recently damaged by Hurricane Sandy. Diller chose to reimagine an entirely new type of public space for New York, one that would create an immersive experience with nature and art.

As for having to work with Apple iOS for apps, Barry Diller told CNBC’s “Squawk Box,” that his companies, and others like them, are “overcharged in a disgusting manner.” Apple takes a commission rate of 30% on in-app transactions from larger firms like Diller’s. 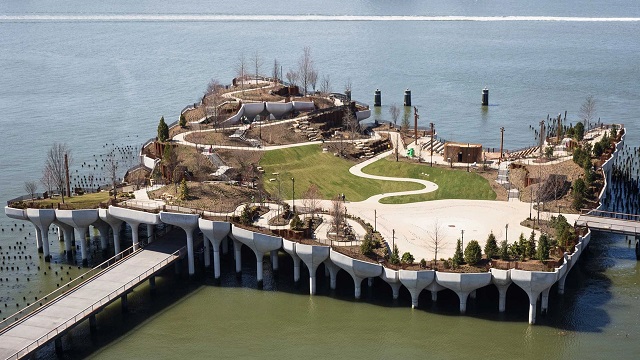 “The idea that they actually justify it by saying, ‘We spend all this money protecting our little App Store,’” Diller said. “I mean, it’s criminal. Well, it will be criminal.”

During the same interview Barry Diller was equally hostile toward cryptocurrencies like Bitcoin.

“I watch some of the people that you have on and they talk about it – $40,000, $12,000, whatever – I think ‘this is nutso talk,’” he said. These comments make a lot of sense considering the volatility of cryptos in recent weeks. Just look at what just happened to Bitcoin. And major players like Mark Cuban and Elon Musk seem to be able to manipulate their value just by agreeing to accept them as payment for their respective companies’ services. And there is no way to know how much they themselves make off of cryptos since they are not regulated and subject to SEC oversight.

Well at least Diller had some nice words for Netflix, calling it the winner of the live streaming market. “Netflix won this several years ago, they’re the only ones who have the scale and momentum to keep making these somewhat lunatic investments in programming,” he, said in an interview with Andrew Ross Sorkin. “You cannot compete with the momentum, the scale, no one will ever be able to do that.”

But now all the major studios Disney, Paramount, NBCUniversal and Warner Bros are offering their own iv streaming platforms. This means that they will no longer provide Netflix with their copyrighted content once the current contacts for those shows and movies run out. Instead, they will keep all of the rights for themselves to stream such content exclusively on their own services. This could mean the end for Netflix in the near future.

In this article:Barry Diller, Finance, Netflix