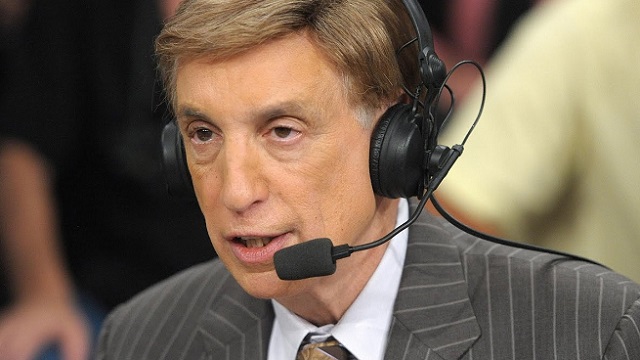 Sportscasting legend Marv Albert is planning to retire. Albert will end his storied career after the NBA playoffs come to an end in June. He will turn 80 on June 12.

The New York Post first broke the story, citing sources at TNT. That is the network which currently broadcasts the NBA playoff games. He is expected to make the formal announcement of his retirement on Monday.

Marv Albert was born in Brooklyn to a Jewish family. His family owned a grocery store on Brighton Beach Avenue between 3rd and 4th Streets known as Aufrichtig. He studded broadcasting at Syracuse University’s Newhouse School of Public Communications from 1960 through 1963. Albert got his start announcing games in 1962 for the minor league AAA baseball team the Syracuse Chiefs. He graduated from New York University in 1965.
–

He was certainly a trailblazer. Albert pursued his career in sports at a time before television had become the standard medium for everything. Color TVs were still so new in the mid-1960s that TV shows had to declare on screen “Presented in Color” as part of a bid to promote the sale of color televisions to people who were still using black and white sets. Back then no one got famous from being a sportscaster. Howard Cosell was just making his break out s America’s first celebrity sportscaster.

Marv Albert first came to prominence as the local announcer for the New York Knicks. He would then go on to broadcast nationally televised NBA games. By the 1980s, Albert was the sports news correspondent for the local NBC television station, covering all of New York’s teams as well as the national sports scene. This was long before cable sports networks and later the internet more or less ended the need for local sports coverage on TV as everyone now gets the latest scores and game clips on their smart phones.

Being that he worked in New York, Albert of course came to national prominence too. He worked in the same building, 30 Rockefeller Center, as David Letterman. NBC News, including its local coverage, are based their and so is the “Late Night” show which Letterman hosted back then. As such, Marv Albert became a frequent guest on “Late Night” which filmed around the same time as the early local news show.
–

Retiring Marv Albert is so much more than a broadcasting icon https://t.co/4mFE4XasWV pic.twitter.com/SFatV4EUEQ

The New York Post said of Albert, “The sound of Marv Albert as a sound belonging to us needs no explanation or examination. After 55 years of calling Rangers, Knicks, NBC boxing, Ch. 4 sports anchoring, 53 appearances on David Letterman, then the NBA at large, we get it — soon to be “we got it.”

“He was peerless as a play-by-play man in that he made all of his dozens of color analysts the best they could be. That was perhaps his greatest talent. He would kid, coax and question until his partners relaxed and delivered.”

This may all sound like an obituary. While it surely is not, millions of sports fans across America will feel like they have just lost an old friend.