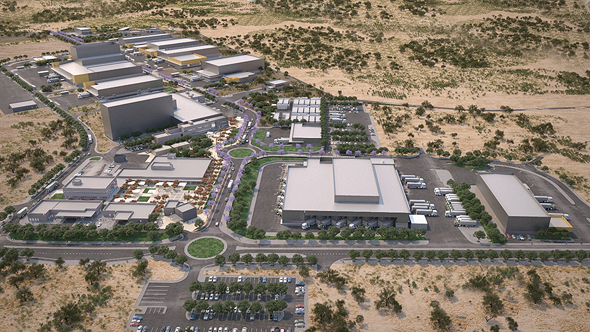 An illustration of what the new IDF Supply Center will look like in the south. (Photo IDF Spokesperson’s Office)

The Israel Defense Forces will construct three new state-of-the-art logistics centers in the northern, central, and southern regions of the country. Calcalist reports that they are intended to replace existing storage facilities that date back since even before Israel’s independence.

The new project will utilize modern AI tech to follow the supply chain and keep track of storage. The new centers will hold what is now spread out over 17 different army bases. The newly automated systems which use artificial intelligence ill reduce the IDF’s manpower needs and should greatly reduce waste. This should save Israeli taxpayers millions a year.

General Sharvit told Calcalist about the work that was put in to finding just the right location for the warehouses. “There isn’t a single logistics center in the country that I haven’t visited, and I am intimately familiar with their technologies and nuances. We went and scouted military supply centers around the world too.”

The General described the differences between similar centers in other countries. For example, he says that in India they have one of the most advanced centers in the world, while, surprisingly, in the U.S. logistics centers are very underdeveloped.

“In Europe, the centers are mainly automated, while in the U.S. it’s still mostly done manually,” he explained. “There isn’t anything similar out there to what we were looking for. The military center is like a huge brick. When you break it down into components, there are civilian equivalents. I store medical supplies, and there’s a civilian company that does the same thing. If I store food, there are also plenty who do that as well. But there isn’t any company that stores medical supplies, alongside frozen and dry food, next to spare parts and fuel.”

In this article:idf, artificial intelligence, Finance