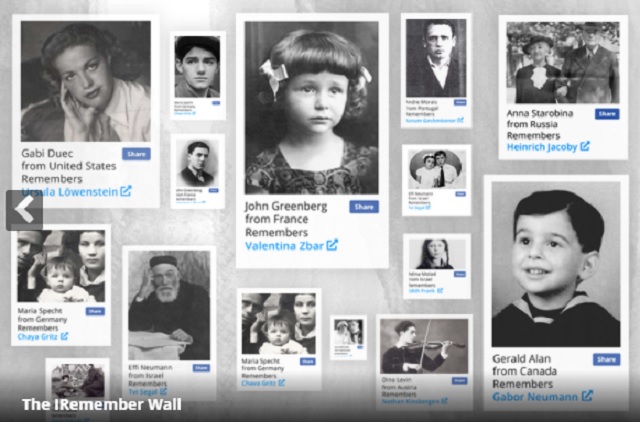 Yad Vashem has announced that it is relaunching its IRemember Wall on line Holocaust memorial , which is now available in six languages — English, Hebrew, French, Spanish, German and Russian. Facebook International is promoting the project on social media. Facebook will use its platform and resources in order to encourage global awareness and outreach this initiative.

The IRemember Wall is described by Yad Vashem as a “unique and meaningful opportunity” for people to participate in an online commemorative activity. By joining IRemember Wall, your name will be randomly matched to the name of a Holocaust victim from the organization’s Central Database of Shoah Victims’ Names and will appear together on the Wall. People can also choose a specific name to remember and match with on the Wall from the Yad Vashem Central Database of Shoah Victims’ Names, which contains over 4.8 million names of Holocaust victims.

Yad Vashem’s #IRemember Wall is a unique & meaningful opportunity for the public to participate in an online commemorative activity ahead of #HMD2021 pic.twitter.com/wzT1mFHKeY

People who join are being encouraged to share the stories on their social media platforms, including Facebook, Twitter and Pinterest. The IRemember Wall went live on 24 January 2021 to mark International Holocaust Remembrance Day which will be observed tomorrow, January 27, 2021.

“I am so grateful for all that Yad Vashem does to honor the victims of the Holocaust – including this incredible IRemember Wall project. Facebook is honored to be a part of this project, helping to tell the story of the millions of women, men, and children murdered by the Nazis. They deserve to be remembered so this never happens again.” 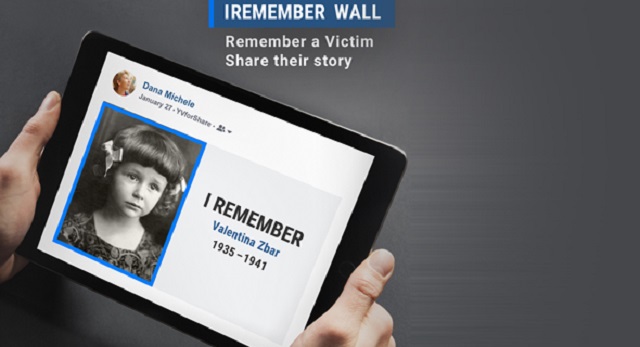 Yad Vashem has also uploaded a new online exhibition, entitled “My Lost Childhood.” This tells the stories of seven homes for child Holocaust survivors which were established across Europe in the immediate aftermath of the Holocaust. “Through the voices of survivor testimony as well as artifacts, photographs and documents from Yad Vashem’s unrivaled collections, this moving exhibition brings to life the terrifying ordeals of the children brought to the homes, and how they were gently assisted – often by survivors themselves – to re-enter normative society.”

“This exhibition sheds light on what Jewish children had to endure in order to survive and then rebuild their lives,” states Dana Porath, Director of the Digital Department in Yad Vashem’s Communications Division. “But above all, it tells the story of the resilience of these children and how, despite their unspeakable traumas, the vast majority became fully contributing members to the countries in which they later settled.”

In this article:facebook, Finance, Yad Vashem