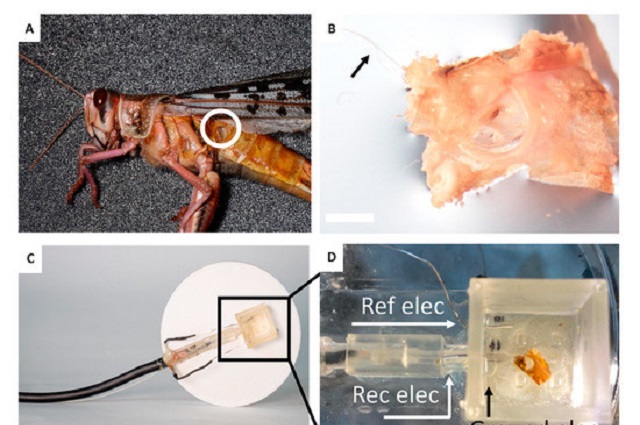 Tel Aviv University researchers at its Center for Nanoscience and Nanotechnology have developed a new technology that can give hearing to robots. The new device which is called “Ear-On-A-Chip” uses the ears of a locust to work. It was created by two Zoologists, Yossi Yuval and Amir Eili, and an engineer Dr. Ben Maoz.

This new device integrates a locust tympanic ear with a robotic platform. The Ear-On-A-Chip is described as a hybrid bio-technological device.

This is like that old Midrash (teaching on the Bible) about what happened when King David questioned God as to why he created spiders. David thought that they served no purpose in the world. That is until his life was saved by a spider.

One wove a web so quickly over the entrance to a cave in which David was hiding that it seemed like no one could have entered it in a long time. So King Saul, who was chasing David at the time and wanted to kill him, assumed that his prey could not possibly be in that cave. And so King David’s life was spared.

Locusts are considered nothing but a pest and something which can only bring destruction to farms and crops. They were even one of the ten plagues. Now we see something good coming from locusts. And if their ears can be used to make hearing robots them soon they may even be used to bring hearing to the deaf.

The scientists explained in their research paper, which was published in MDPI, that, during their hundreds of millions of years of evolution, insects have evolved some of the most efficient and robust sensing organs, often far more sensitive than their man-made equivalents. Using an Ear-on-a-Chip method, they say that they managed to create a long-lasting miniature sensory device that operates as part of a bio-hybrid robot.

The neural signals recorded from the ear in response to sound pulses are processed and used to control the robot’s motion. So the sounds heard by the locust ear control the robot. Like having a dog around so that its highly sensitive hearing can hear signs of danger which humans cannot, only in a stronger and more efficient way. 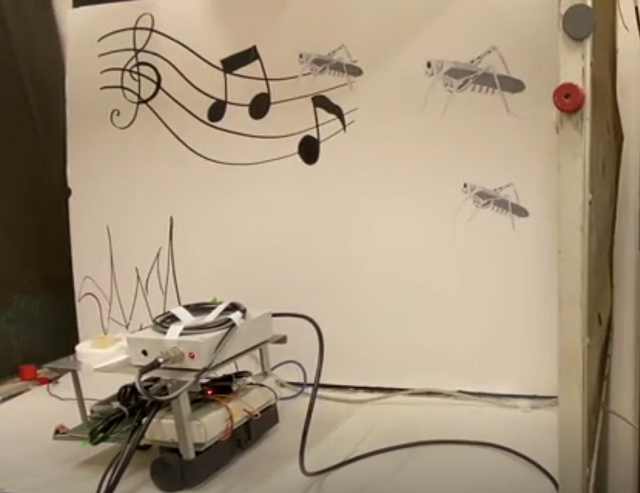 Soon enough the Ear-On-A-Chip will be able to hear any sound from far away, like using a boom mike, while also interpreting what the sound mean so that remote control devices can become fully autonomous. In this way people will not need to be anywhere near a dangerous place to listen in and make the conclusions on what is happening.

The scientists behind the new tech spoke about their creation with the organization United With Israel.

We wanted to show that we can integrate between biological and electronic systems, and in the sense of hearing there are electrical sensors that are suitable for the task,” explained Dr. Maoz.

Idan Fischel, a graduate student, is credited with making the new tech work. “Insects have hearing systems that are structurally simple, but do complex data processing,” he said. “At the same time, the adaptive system is lightweight and small in size, and easier to use than a mammal’s ear.”

“The challenge is huge. So when we decided to start we chose to go for something that is easy to compare to existing systems, such as a microphone or speaker, but we are sure the project can be taken to other places, such as other insect senses like hearing, smell, vision – that’s where insects have tremendous benefits,” said Dr. Maoz.