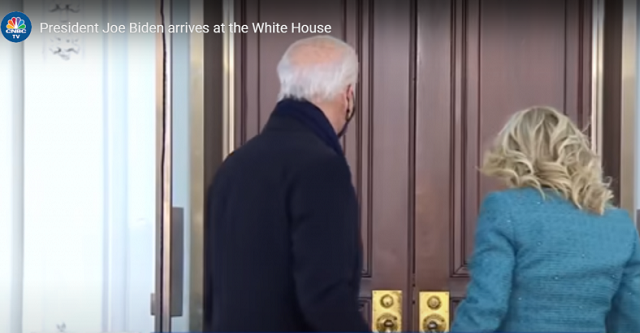 Newly inaugurated President Joe Biden and his wife Jill Biden were locked out of the White House the first time that they arrived there as President and First Lady of the United States. This is because, in what people are calling a childish and vindictive move, Donald Trump sent the staff home as he headed to Florida Wednesday morning.

This happened at the North Portico, the official entrance of the White House for the President and First Lady.

Some people will see this as an honest mistake. They may say that Donald Trump was being nice by giving the people the rest of the day off. But this bears no credibility because Trump new that he would cease to be their boss at 12 noon that day.

No, this was a deliberate snub by Trump. The National Journal reported that on his way out the door of the White House as well as the Presidency President Trump actually sent the butlers home for the day. This can only be interpreted as a deliberate gesture of disrespect toward his successor.

The Chief White House Usher, Timothy Harleth, was actually fired that morning by Trump himself. Harleth had previously worked for Trump Hotels and was hired by Melania Trump herself.

But no matter what the outgoing President told the permanent White House staff they should have known that someone needed to be on duty to grett the new First Couple.

A veteran White House social expert told The National Journal that it is a “big protocol breach for the president to ever stand in front of a closed-door at the White House. That may be why there was nobody to open the doors to the Bidens. You couldn’t expect the Biden staff to know to do that. Doors are opened and closed by ushers. There are rules about all these things and everyone has their job.”