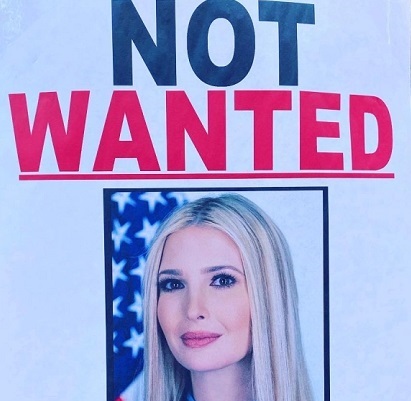 Ivanka Trump has been noticeably quiet since rioters ransacked the United States Capitol building last Wednesday. Up until that point the President’s daughter had been all over social media posting recaps of all of her father’s accomplishments while in office. She also put herself conspicuously at the center of all of the action which led many to speculate as to her own political ambitions.

Unfortunately for Ivanka Trump and her two older brothers many pundits are now saying that Wednesday’s riot might mark the end their political careers. This is because the Republican Party establishment has been distancing itself from the Trump family and many Republican members of Congress are now even calling for the President’s impeachment.

But unlike her father Donald Trump Ivanka Trump has not been banned by Twitter. However, she has not been making constant social media posts. Ivanka has made just one post since her ill planned Tweet posted during the riot on Wednesday.

Ivanka tweeted on Friday, “This moment calls for healing and reconciliation. We must revitalize the sacred bonds that bind us together as one national family.”

This came after she tweeted during the riot, “No. Peaceful protest is patriotic. Violence is unacceptable and must be condemned in the strongest terms.”

The President was hesitant, with multiple sources telling CNN he appeared at times to enjoy watching the chaos he had unleashed unfold. Trump turned down the request for an immediate televised address, but would eventually compromise with a milquetoast version of reproach from the Rose Garden, which he then tweeted. “We love you,” he said in a recorded video to the people who forced lawmakers and staff to hide under chairs, scared for their lives. “Go home,” as though they had stayed too long at a dinner party.

CNN, however, has reported that Ivanka Trump took the lead in convincing her father to take a more conciliatory and actually acknowledge that Joe Biden will become the next President of the United States on January 20. CNN reported a White House official as saying, “The President didn’t want to listen to people telling him he had to get these people to stop doing this.”
President Trump was reportedly pleased with the carnage at the U.S. Capitol and did not see any need to condemn it.

As the rioting continued the President tweeted, “These are the things and events that happen when a sacred landslide election victory is so unceremoniously & viciously stripped away from great patriots who have been badly & unfairly treated for so long. Go home with love & in peace. Remember this day forever!”

“Mike Pence didn’t have the courage to do what should have been done to protect our Country and our Constitution, giving States a chance to certify a corrected set of facts, not the fraudulent or inaccurate ones which they were asked to previously certify. USA demands the truth!”

A different source told CNN “Everyone else was told to leave the room. The message was, ‘President Trump has to tell these people to stop. He’s the only one they’ll listen to,'”

So after the initial meeting ended it was Ivanka Trump who convinced Donald Trump to release his “concession” video Thursday evening, telling him that he needed to take immediate action and speak to the American public on television. The source also stated that without the presence of Ivanka Trump in the White House on Thursday President Trump might not have conceded the election.

However, it did not take long for President Trump to change his tune. He tweeted the very next day, “The 75,000,000 great American Patriots who voted for me, AMERICA FIRST, and MAKE AMERICA GREAT AGAIN, will have a GIANT VOICE long into the future. They will not be disrespected or treated unfairly in any way, shape or form!!!”

This and other posts led Twitter to ban Donald Trump permanently from its service.