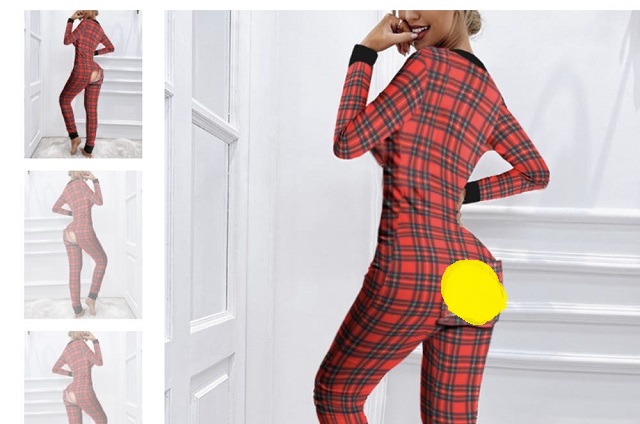 Women’s fashion company IV Rose is shocking people with its Butt-less pajamas. Ads have been popping up on websites everywhere which, to put it mildly, are a bit cheeky.

The ad made headlines after appearing in the Elle Magazine story about how journalist Christie Smythe fell in love with despised businessman Martin Shkreli when covering his story.

Founded in 2015, IVRose describes itself as a unique shopping website with a “distinctive tone” focusing on women’s fashion. It offers affordable products including women’s clothing, accessories, shoes, bags and more. Its business covers more than 220 countries and regions around the world. IV Rose says that its vision is “bringing happiness into every woman’s life.”

IV Rose uses simplicity in describing its sleep ware calling it “Plaid Functional Buttoned Flap Adults Pajamas.” Made from polyester, it offers a flap over the rear end, comes in many colors and is listed at $26.99. They are reminiscent of “union suits,” the all red pajamas from the nineteenth century which can be seen worn by Union soldiers under their uniforms in the old movies.

My only takeaway from the Martin Shkreli article is this ad I got served for assless pajamas pic.twitter.com/9D7pw3gDdv

There is nothing new about provocative advertising. Every company seeks and edge in its promotions. And misdirection is essential to clickbait. Come on, admit it! How many times have you clicked on a link because of a revealing picture, only to be disappointed in the story’s content? Or maybe Ariana Grande or Brad Pitt was mentioned somewhere in the headline and the story turned out to be old news.

Butt in this case the picture in the advertisement is actually relevant. This should be remembered for posterity’s sake. Or should we say for posterior sake?

Perhaps IV Rose got the idea for the pajamas from the 1981 Ryan O’Neal movie “So Fine.” That box office dud tried to parodize the designer jeans craze of the time. In it O’Neil saves his flailing family fashion business with new bottomless pants. The joke there was that he only came up with idea after wearing a pair of way too tight designer jeans.

When running away from someone the paints of course rip over the butt cheeks and so Ryan O’Neil, who was not wearing underpants, covers the whole with pieces of clear plastic. People see this and think that it is the latest fashion craze.

Butt the IV Rose pajamas are only meant to be warn indoors. At least we hope so.