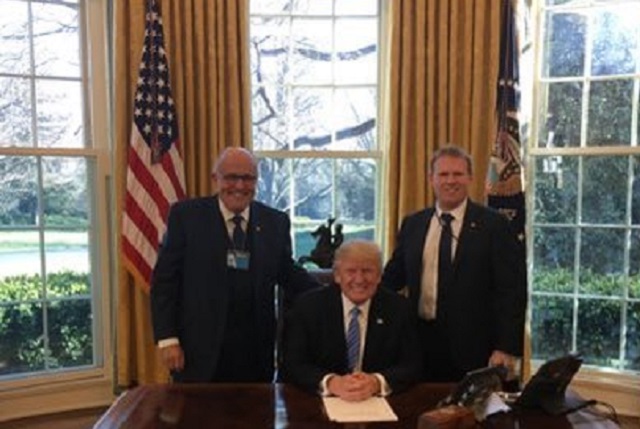 Rudy Giuliani’s son Andrew Giuliani is to be appointed by President Donald Trump to the U.S. Holocaust Memorial Council. This is yet another new appointment that the outgoing President has made with just a month left to go in office. Some observers say that this is a sign that President Trump still expects to serve a second term as such appointees can and probably will be removed once President Elect Joe Biden assumes office on January 20.

But in the case of Andrew Giuliani many are criticizing what they see as cronyism. The appointment seems to be a gift to President Trump’s loyal pal Rudy Giuliani since Andrew Giuliani does not apear to have any qualifications for this position.

The position is just one of 55 board members who only meet twice a year.

Andrew Giuliani has already been given senior White House positions with fancy titles and high salaries, earning as much as $95,000 in taxpayer money. In 2017 he started out working in the White House Office of Public Liaison and Intergovernmental Affairs.

But the only item on Giuliani’s resume to qualify him for such as position seems to be his serving frequently as President Trump’s golfing buddy. Hid competence for his job was so questionable that former White House Chief of Staff John Kelly revoked Andrew Giuliani’s access to the West Wing.

“It is my honor to serve on the board of the US Holocaust Memorial Council. At a time when religious freedom is increasingly threatened and anti-semitism is on the rise, we must always remember the atrocities of the Holocaust and teach our children that government should never impede our individual right to practice religion. To be appointed by this President, who has been a champion for our Jewish brothers and sisters all around the world, makes this honor that much more humbling. Thank you for your leadership.”